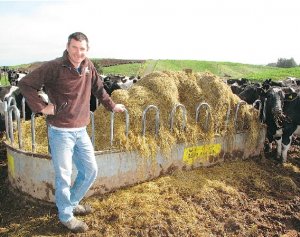 The farm is near Benneydale, 42km south of Te Kuiti.  At 21km long and seven kilometers across, this is a big operation, comments manager Dean Boros.

The rising two-year-old heifers are fed on crop and haylage during May and June. In their mobs of 200 they have a daily break of swedes and four bales of haylage. This needs two men working all day to complete the task. About 3000 bales are fed out in this time.

Boros was concerned about haylage wasted by trampling into the muddy ground. They were feeding 4kgDM daily but only 1-1.5kg was being eaten, he estimated. So two years ago the farm bought six Agbrand feeders, each an S5 with 26 feeding positions.

“I had been told about them four years ago but I didn’t believe they would work. I’ve had to eat my words, they work so well.”

Still skeptical when they arrived, his first trial was in adjacent paddocks with and without feeders, both mobs being fed at the same time.

“When I returned some hours later I was immediately convinced, the ‘without’mob bellowing for more feed after trampling most to waste while the paddocks with the feeders – still with a lot left in them – had stock well fed and contented. The wastage was reduced to almost zero.”

The farm now has 16 feeders and each day’s ration of three-four big square bales are either stacked in the feeders or the strings are cut so the haylage falls loosely.

Boros believes the heifers are gaining weight at 0.5-1.0kg/day. A dairy farmer seeing them said, “They were looking fabulous and any dairy farmer would be proud to own them. If  I was starting this cropping programme again the Agbrand feeders would be the first things I would buy,” Boros says.

At the end of each season the feeders are cleaned and coated with waste oil and stored for the following season.