Humps and hollows deal with the deluge 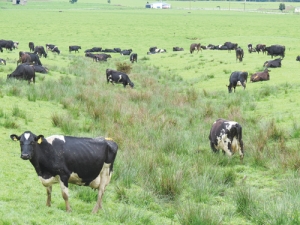 Humping and hollowing are features on many dairy farms on the West Coast.

On the West Coast of the South Island, for 30 years, many dairy farmers have 'humped and hollowed' their land, dealing with the whopping natural challenge the region lays down – massive rainfall.

It's sometiems jokingly called the 'wet coast' and for good reason. The westerly winds that sweep across the Tasman Sea can dump massive rains on the forests and flats where dairy farmers operate -- from 2500mm/year to as high as 6000mm! And the local DairyNZ consulting officer, Ross Bishop, says farmers have become very proficient at managing its effects.

Bishop knows the West Coast well. Originally from Hamilton, he came to the Coast in 1990 as a MAF advisor, serving in a variety of farm consulting roles then joining DairyNZ in 2012. He's based in Greymouth, the largest of three towns on the Coast.

Dairying is the main farming activity and the producers are a fiercely independent lot who supply their own cooperative, Westland Milk Products, Hokitika. There are no Fonterra signs and few sheep – the rain is not conducive to wool production.

In the 19th century Hokitika was famous for goldmining and enjoyed a close relationship with Melbourne, even being called a 'suburb' of Melbourne. Now Hokitika depends on 'white gold', the stuff that flows, and it's Bishop's job to help keep it flowing.

"The [length] of my patch is equivalent to the road distance between Auckland and Wellington and that area has roughly 400 dairy suppliers. I try to make sure that every two weeks I am at one or the other end of the supply area. It's not cost effective to do it all in the same week, given the geography. When I am out on the road the days are full of appointments, meetings and generally catching up with farmers, looking at what's happening and where."

Bishop says while rain is a big issue, climatic variation is a problem for farmers. "Farm systems must be robust and resilient to cope with that variability. When you overlay that on the market volatility that's become a part of the landscape it makes for a real challenge."

Aside from the specific climatic challenges, Bishop says success boils down to the basics of grass and cows and how these are managed. Some Coast farmers are good at this and others not so good – just the normal bell curve. But the dairy farmers have learned to manage.

"On the West Coast we are coping with high intensities of rainfall you just don't get in the majority of farming areas around New Zealand. Our dairy farmers' ability to manage stock in pasture under persistent and challenging conditions sets them apart from farmers in other regions.

"Pugging is not unusual but we have an advantage in that the soils here drain quickly once the rain stops, so we can go through periods when we lack soil moisture. That was highlighted in late summer/early autumn of 2012-13 when the West Coast was the first area in the South Island to be declared a drought area."

The rainfall varies hugely on the Coast. In simple terms, the further south you go to, say Fox Glacier and beyond, the higher the rainfall; whereas at Karamea in the extreme north of the Coast there is less rain. But while the average rainfall of the region remains constant, there are extremes – deluges and times of dry.

Ross Bishop says with the low payout and challenging weather he's spending much of his time advising farmers how best to structure their businesses to withstand these pressures. Most farmers are now at or close to balance day, but some have still to get there.

"The whole tenor has improved in the last month. From May of last season until a month ago we were getting long consistent wet periods. If it wasn't raining it was cool and there wasn't a lot of drying going on and we had soils that remained cold and wet for a long time.

"The spring started slowly with pasture growth rates and soil temperatures two-three weeks behind where they would normally be. Overlaying that was a good mating last season so the calving rate was higher this season and that put a lot of pressure on early season pasture performance."

Bishop says farmers tried to reduce their use of imported supplements, but that put pressure on pasture and led to grazing rotations quickening before they should have. That pushed pastures covers down a bit which in turn suppressed pasture regrowth rates.

"It was hard yakka until about a month ago; I'm not saying we're out of the woods yet, but pasture growth is matching stock demand.

"Milk production is tracking at or about last season's production which is a pretty good achievement. It's a good reminder to farmers that they can achieve similar levels of production on a pasture based system without the need for imported supplements." 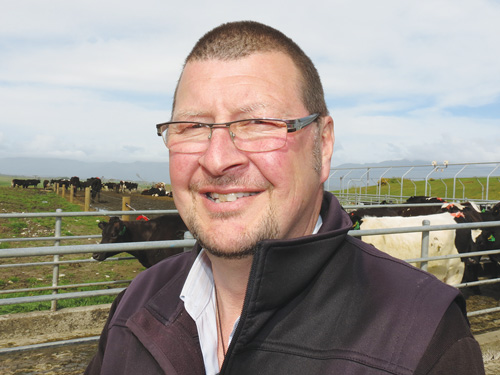 Folks do things differently there

Humping and hollowing, unique to the West Coast, creates contour in paddocks where there was previously none, helping drainage. This 'rearranges' low lying, poorly drained land, creating humps of dry and hollows from which water can drain, says Ross Bishop.

"If you look at a paddock that has been humped and hollowed you will notice that the back of it will be slightly higher than the front. By creating a bit of contour where it didn't exist before you help that area become better drained.... You get about 10% more land by building humped areas. The aim is to sustain pasture and stock longer."

Bishop says more land on the Coast could conceivably be turned into pasture if it was humped and hollowed.

Another way they improve drainage there is by 'flipping' the pasture -- cultivating it so that the sand, gravel and soils are mixed, create a freer draining pasture.

For DairyNZ's Bishop the West Coast is now home. He loves the challenges in the job and the local people. "I was told the hardest thing was to get people to come to the Coast; the next hardest thing is to get them to leave."