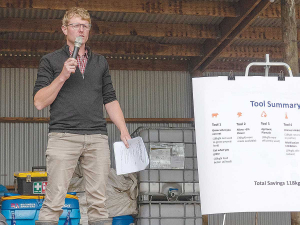 Some farms have been up near 300kg but the average Canterbury farm is running at the 220kg mark “which is not all that bad,” he says.

However, Everest has concerns around the time it will take, not just for farmers to get their heads around it, but also the one to three years for the changes to farm biology to take effect.

“Coming in and saying we’re going to make big changes in 12 months is not quite as easy as it is for someone at government department level to say it.”

Everest said it would be easy dropping from 300kg to 270kg: “Just stop putting the cocaine up the grass’s nose.”

Going from 270kg to 220kg required a bit more lateral thinking and discipline, but then the final step down to 190kg will be a lot harder, he said.

“We’re effectively going into production-cutting space rather than trying to make the efficiency savings, which is the 300 down to the 220 mark.”

On the feed budget, Everest advised farmers to “eat what you grow and grow what you eat.”

“But what the hell’s the point in growing 16.5t if the average group can only consume 12.5? Focus on growing what you need to actually consume in the most efficient manner.”

Everest said topping pasture is a waste of nitrogen, as is “hurtling around” on an 18-day grazing round when the uptake of nitrogen takes between 20 and 24 days depending on time of year.

“We could get potentially get 18kg of nitrogen saved just through running the same policy but slowing the grazing round down and applying urea after the cows.”

On the use of clover, Everest said too much applied nitrogen was a “death spiral” for clover, while repeated research over many years has reaffirmed that reducing nitrogen increases clover content.

“If we can increase 10% clover in our pasture that’s between 40kg to 70kg of free nitrogen per year – not always at the times that we need it but if we understand that, we can manipulate our nitrogen applications to try and take advantage of some of that free stuff.”

“If we’re going to higher energy feed we can arguably have lower greenhouse gases and the same level of profitability.

“Clover is not a terribly competitive part of our pasture mix; keep our diploids down to 12kg and our tetraploids down to 16kg at planting. It will take them a little bit slower to establish but you’ve got to be patient and you’ll get the clover reward over time.”

Everest’s Tool 3 is the use of the plantains Ecotain and Agritonic, although he acknowledged the difficulty of keeping their percentages up in pasture.

On grass types, Mark Everest presented figures from a client farm, showing 1.8kgDM/ha gain from tetraploid grasses over diploid grasses with 27kg/ha less nitrogen. But like clover and plantain, tetraploids take "a little bit of change in the management."

Adding all the tools up gave an aggregate saving of 260kg to 270kg but in practise they relied on and overlapped each other.

Farms operating around the 250kg and 280kg mark could probably achieve 118kg savings, he said.

"Do I think you could save 118 kilos of nitrogen and maintain your level of productivity, if you're somewhere around that 220 to 240 mark? Probably not.

"So individual parts for individuals... some of you will be doing a good job of achieving all of these already, or a proportion of them, and there's probably some room for improvements in some spaces."

Staff needed to be on board with any changes, he said.

"If the people actually executing the tasks don't have an understanding of why, then history would suggest that implementation is somewhat limited."

For his final piece of advice, Everest said his farmers needed to make sure spreader operators don't put too much on just because it's the easy thing to do, to get rid of the last 300kg in the bin.

If farmers don't "get in line with all this sort of stuff" we will get 10 years down the track and find no improvement in water quality, which was the point of the policy, he said.

"We will get a harder top-down approach, which I don't think any of us want. So we really need to make a good focus at making it work."

A tall grass touted as a multi-purpose wonder plant has proved its worth as a shelterbelt replacement for Canterbury dairy farms, says Lincoln University ecology professor Steve Wratten.