Keep diseases away from sheds 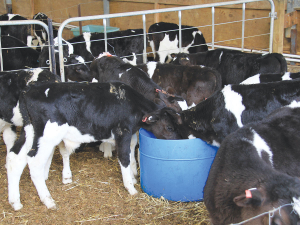 If you're buying or selling calves or milk, take these simple steps to reduce the risk of spreading Mycoplasma bovis and other diseases.

M. bovis is a bacterial disease that can cause serious illness in calves and adult cattle. DairyNZ says calves can contract the disease by direct contact with infected cattle or by consuming milk from infected cows.

About 80 to 90% of infected cattle show no clinical signs, making it nearly impossible to detect a cow suffering from M. bovis by looking at her.

Testing herds for M. bovis is complex, which means negative results are a good sign, but not definitive proof that a herd is completely free of the disease.

And M. bovis is shed intermittently by infected cattle. Shedding and clinical disease typically occur in times of stress, such as at calving.

It is important that every precaution possible is taken to prevent M. bovis from spreading. This includes precautions when buying or selling calves or milk, when it’s vital to take biosecurity practices and animal health history into account.

When buying calves, stock movements are the highest risk for spreading M. bovis. Buy them from as few sources as possible: deal directly with the source farm or via an agent.

Don’t hesitate to ask about any M. bovis test results available from the farm. Also ask if the farm has been subject to any M. bovis tracing by MPI.

Ask about the stock trading practices of the farm and also if all stock movement records are up to date and recorded in NAIT.

Get a picture of cow and calf health on the farm for the past two seasons, and use the pre-purchase checklist available at dairynz.co.nz/mbovis.

Avoid buying from saleyards because of the cattle mixing that occurs there. Buy only calves with NAIT tags and promptly record all movements.

Ask your trucker to avoid mixing calves with other cattle in holding yards or on the truck and keep bought-in calves isolated from your main group for seven days and monitor them for signs of disease.

Find a buyer now for your future weaned calves, if possible, and tell buyers about your efforts to reduce risk of M. bovis exposure.

• Do not feed milk from cows under treatment for mastitis or other illnesses. This milk should be discarded. These cows are more likely to shed M. bovis into their milk than healthy cows.

• Acidification with citric acid to a pH 5.0 or below for at least eight hours will kill M. bovis, but below a pH 4.0 the milk will be unpalatable and the calves will refuse to drink it. DairyNZ’s recommended target is pH 4.5.

• Pasteurisation will kill M. bovis if the machine is working correctly and the proper procedures are followed. A pasteurising machine is a big expense.

• Addition of yoghurt to milk is a less reliable way to reduce the pH, as this process takes more time and is temperature dependent to get the culture growing. If the pH doesn’t drop below 5.0 for at least eight hours, M. bovis will not be killed.