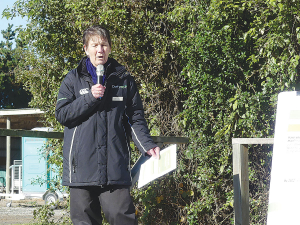 The advice was timely as it was followed by the one-in-100 years rain bomb which has soaked the entire Canterbury province and caused widespread flooding, disruption and infrastructure damage.

Dalley said a simple ruler or a gumboot test - assessing how quickly water or mud fills a footprint in the paddock - were both good indicators of paddock wetness and therefore how likely it was that cows could lie down to rest.

For the sake of animals' welfare, eight hours a day lying is the recommended minimum, preferably closer to ten.

Dalley said a trial carried out in Southland last winter used tracking devices to look at cows' lying behaviour and found significant decrease in lying time in response to rain - even when it was not heavy rain.

The times cows spent lying down were both fewer and shorter.

"So that to us indicated that those cows were tired and so when they had better lying conditions, they were choosing to lie rather than grazing," said Dalley.

A lot of interacting factors were looked at, but it was really the surface water that had the biggest impact on lying time.

Dalley said intensive winter grazing rules recommended in the National Environment Standards have been deferred for 12 months to give the industry the opportunity to demonstrate that it can do things better.

Those rules would require no pugging greater than 20cm, and no more than 5cm over 50% of the paddock.

Dalley said that would be very challenging for Southland farmers with their heavier soils, but there was no room for complacency in Canterbury.

"I can tell you I have seen cows at [Lincoln University dairy research farm] Ashley Dene which were probably not achieving their lying times because of the soil surfaces, so we do need to take this seriously.

"If we do not do things better this coming winter, we will be regulated," she said.

Meanwhile, recommendations from the task force put together following the activism around Southland wintering practices two years ago included making sure no cow gives birth on mud; providing a nutritionally balanced diet and a good transition plan to avoid acidosis for those on fodder beet; and continuous access to fresh clean water.

While many Canterbury farmers sent cows away for grazing then brought them back for calving, those who kept them on winter crops should pull them off at least two weeks before their calving dates.

Dalley said all farmers this year need to have a winter grazing plan around how they're going to graze their crop paddocks, identify critical source areas and implement good management practices. For those with stock on undulating country, there were also requirements around grazing on slopes.

A lot of good planning resources were avaialble, with recently-released winter grazing modules from DairyNZ, MPI and Beef+Lamb NZ, she said.

"What we need to be doing for this winter is making sure that you complete your winter grazing plan for all of your crop paddocks.

"If your animals are going out to a grazier, so they're not going to be under your control, we really recommend that you work with your grazier to make sure that you're comfortable with what they've got planned."

It was also important to have a contingency plan for those adverse weather events. "We've been lucky in Canterbury the last few years, we haven't had a significant snow event, but there will be one that will come and there's likely to be periods where we'll have those cold southerly coming through."

Dalley warned that the dairy industry will be under increased scrutiny this winter.

"Those that have issues with the way our cows are being managed have already indicated that they will be out there looking for shots that will end up in mainstream in on social media. So it's up to all of us to be making sure that we've got our plan, we've got our plan B and that we're implementing those good management practices."