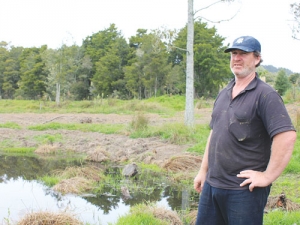 One of the volunteer farmers in the 10 year Fonterra-DOC $20 million Living Water scheme to improve the natural habitat of five key New Zealand waterways, Brown has set aside a quarter acre of his farm to be used as a monitored wetland.

Steve and his partner milk 440 cows on a 180ha which has a 50:50 mix of rolling hills and river flats on Northland’s productive Hikurangi River flats. Their farm is part of the Hikurangi catchment 55,000ha feeding the Northern Wairoa River, the main tributary of the Kaipara Harbour. This is a key river in the Living Water scheme.

Brown says a Fonterra sustainable dairy advisor approached him about setting aside land for a wetland. “George learned about a piece of land I had fenced off while he worked for the Northland Regional Council. He asked me if I might be willing to do it again.”

The couple already have a piece of fenced wetland on their property, a small block of swampland they let revert to native bush not long after they bought the property 10 years ago.

When they took over the property Brown noticed a grove of kahikatea and swamp miro in the corner of a paddock which seemed constantly wet. They fenced it and let it revert to a natural wetland state which took little work besides time with the scrub bar to prevent kikuyu growth from overwhelming native shrubs. “It was an out-of-the-way corner and production from it was next to nothing so we just fenced it up without a second thought.”

Stakeholders plan to use the new wetland to catch nutrients and sediment running from nearby hills which Brown says will be monitored.

With the land opposite the wetland being subdivided into lifestyle blocks, Brown says it is easier for him than them to break off an area for wetland, though he says wetlands don’t need to take up much room.

Having a wet corner that backed onto the road also played a big part; the public can see the wetland at work and researchers can get to it easily.

Stakeholders had some physical work to do on the new wetland: excavation needed for three pools took a contractor most of a day.

The area will be planted with swamp plants before the onset of winter. Ongoing planting work might be necessary as the wetland is next to flood banks and is prone to flooding.

Steve Brown's farm in the Hikurangi Catchment is one of many farms helping improve water quality via the Living Water scheme.

Fonterra and DOC started the 10-year scheme last year to improve water quality and grow the numbers and variety of native species.

The Hikurangi Catchment, which covers about 55,000ha, is a catchment of the Wairua River that flows, eventually, into the Kaipara Harbour. Within the catchment is a 13,140ha floodplain of which 5670ha is part of a swamp drainage scheme.

The Living Water scheme is in place in four other catchments in important dairying regions nationwide. These are Pakorokoro/Miranda at Takapa Moana, Firth of Thames; three Waikato peat lakes – Areare, Ruatuna and Rotomanuka; Te Waihora/Lake Ellesmere, Canterbury; and Awarua-Waituna, Southland.

'Kidneys' of the landscape

OPINION: Wetlands are like giant kidneys, protecting the health of waterways by helping dilute and filter harmful material.

Denis Marshall has worn plenty of hats throughout his working life, but his plea to the wine industry has required a one-size-fits-all.