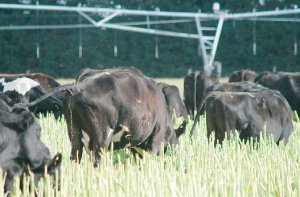 WILL TRADITIONAL wintering systems on crop be sustainable under nutrient loss limits?

That’s one of the questions part of a major dairy systems trial underway at Lincoln University’s Ashley Dene Farm and Dairy Research Farm, as well as elsewhere, is aiming to answer.

Cows grazing winter crops reach stocking densities as high as 500/ha on a fresh break, hence the concern about their environmental impact, particularly on free draining soils such as those at Ashley Dene and elsewhere in Canterbury.

“It’s like a sieve. When they urinate on that it pretty quickly drains through the profile so our wintering systems are very prone to nitrate leaching.”

Research on Lincoln University Dairy Farm shows losses from the milking platform are consistently 25-30kgN/ha/year, which is within likely limits, but that excludes wintering losses.

Data on those is lacking, hence the project.

Edwards told the field day losses might be 90 to 200kgN/ha/year from winter crops such as kale given a urine patch is a spot loading of 700kgN/ha.

Applying eco-n to freshly grazed areas within a fortnight of grazing, manipulating the diet with supplements, and sowing a forage cereal as soon as possible post grazing to mop up nitrogen before it is lost are possible ways of limiting losses which the trial is assessing.

Large columns of undisturbed soil from the sites have been taken – Edwards pointed out what a challenge that is on such stony soil – and placed in lysimeters so the field treatments can be simulated and leachate collected to assess losses.

Placing drains under the trial paddocks themselves was ruled out as the soils are so free draining any leachate would simply pass straight through a drain, and not flow laterally to a point where it could be collected.

Besides monitoring the environmental impact of three crop wintering systems at Ashley Dene, their impact on cow condition score is also being assessed.

The aim is to lift condition half a score over the winter.

Edwards notes the rations are higher than industry standards, but says there’s a need to “redefine maintenance requirements” for today’s cows as they need 100 to 110MJME/day just to standstill, and at least 30-40MJME/day above that to gain half a condition score over winter. Consequently allowances in the trial are calculated to provide 150MJME/cow/day.

Measured residuals of 1.7-1.8t/ha kale indicate 85-90% utilisation. Fodder beet utilisation is 100% but, as the field day heard, extra care is required in transitioning cows onto, and off, the high starch beets.

“For the first couple of days they were on grass and silage with only 1kg of fodder beet [per head],” Dairy NZ’s Dawn Dalley explained. “We didn’t move them on from that until they started eating them. They cleaned the leaves off pretty quickly but it took them a couple of days for them to get started on the bulbs. We ended up having to go in with a spade and chop some up.”

Cows were also kept off the crop overnight to reduce the risk of a breakout and possible fatal intakes. Only after a fortnight were they up to their 8kgDM/head/day ration.

Even with that cautious approach three had to be taken off the crop due to acidosis – most likely because they’d taken to it before the rest so were getting more than their fair share. As of early July the fodder beet mob still had the highest proportion of cows below body condition score 5 (see table).