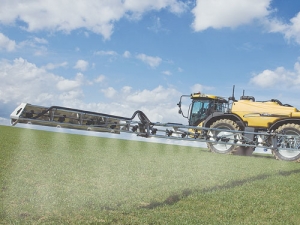 The economic cost of nitrogen loss through volatalisation is high, according to field trials.

Million of dollars of nitrogen is vanishing into thin air, causing losses to farmers and to New Zealand in wasted imports, says fertiliser company Ballance Agri-Nutrients.

This conclusion arises from field trials done by Ballance to measure ammonia losses from standard urea and urea treated with a nitrogen stabiliser.  These losses occur when the nitrogen in the urea volatilises into ammonia.

While farmers try to avoid the loss by applying urea when wet weather is forecast, research by Landcare Research and Ballance has shown that 5-10mm of rain is needed within eight hours of application to reduce ammonia loss, a finding consistent with research in New Zealand in the 1980s.

Ballance science manager Aaron Stafford says nitrogen loss through volatilisation is well-known, but the economic cost is not.

“Around 500,000 tonnes of urea is sold in New Zealand each year and if you use the rule of thumb that 10% of available nitrogen will be lost from volatilisation, that’s the equivalent of 23,000 tonnes of nitrogen not doing its job in the soil to generate a return for farmers.

“Urea fertiliser contains 46% nitrogen, so at $600/t for urea, this means $30 million of nitrogen is lost on average each year as ammonia.”

The losses are financial and environmental, with volatilised nitrogen re-deposited from the atmosphere, not necessarily on the farm from which the nitrogen was lost.

“Farmers have no ability to control where this volatilised nitrogen is re-deposited.

“It could end up in rivers, lakes or forests, which is less than ideal environmentally.”

Field trials in Waikato, Manawatu, Canterbury and Otago were done during two successive springs. They showed ammonia losses from urea of 11-23%, with an average of 15% -- again consistent with previous independent work.

Treating urea with Agrotain nitrogen stabiliser (SustaiN) reduced these losses by an average of 68%.

Stafford says the results are consistent with previous research which gave an average 45% reduction in ammonia losses with SustaiN urea over standard urea.

“The data also shows that volatilisation is not a summer-only phenomenon. It can happen at all temperatures.”

He says a product like SustaiN is sold at a premium over standard urea, but that premium is recovered in reduced nitrogen loss, better pasture response and reduced reliance on immediate rain to minimise volatilisation.

The co-op now offers SustaiN in place of urea in a wider range of mixes and blends, extending the benefits to applications which include other nutrients.