Northland herd on track to 500kgMS per cow 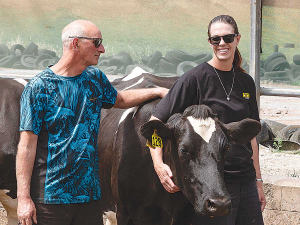 The decision to move to overseas genetics has put a Northland farming couple on the track to achieving 500kgMS/cow.

The Sandford property at Waipu has been in Wayne Sandford’s family for several generations. Wayne took over the running of the 157 hectare farm and herd around three decades ago and Kelly recalls the breeding of the 270 Friesian cow herd was predominantly New Zealand genetics.

“When Wayne and I got married we were very focused on BW. Each year we’d select the top BW bulls on offer but were becoming concerned at the udders in the daughters they were siring - they were small and it wasn’t uncommon for heifers to go dry soon after entering the herd.

“Our farm system is System 4. We’re after top production from our cows and the udders we were seeing among replacements was beginning to really compromise our production, so we changed our focus from BW to traits.

This saw us move to another New Zealand genetics company whose line-up of bulls had good udder traits. Unfortunately their gene pool of straight Friesians was limited and when this resulted in the company encouraging us to crossbreed, we began looking elsewhere,” Kelly Sandford said.

“Customer service is everything to us and we had also become frustrated at the large turnover of staff the company was constantly experiencing. We were continually getting new representatives who didn’t know us, our herd or our farming goals.

“It was then that we met Dyanne Osborne on the World Wide Sires’ stand at Fieldays and realised how focused the company was on traits and how they were able to select sires from a database of the best Friesians in the world to suit our farming system.”

“Ahead of her time”

World Wide Sires’ Dyanne Osborne is known, by name and reputation, across the New Zealand dairy industry. She’s known as a trailblazer her belief and advocacy in the value US genetics could bring to New Zealand dairy farmers never wavering over more than 30 years.

Osborne says the late 1990s was “a time of challenge and change. Multi-year research comparing the fertility and production of North American Friesians with New Zealand and Irish cows revealed a concerning level of infertility. This was largely a result of milking year-round without the breeding pressure which comes with seasonal dairying. Coincidentally the research results came out at the time global dairying was changing in favour of seasonal. It was a time of change and opportunity and one Select Sires embraced.

World Wide Sires is the marketing arm for Select Sires – one of the largest dairy farmer owned cooperatives in the world.

“Today even a cursory look over the stats of the World Wide Sires’ bulls on offer today demonstrates some of the best fertility statistics combined with health and production records, available in the world today.

“The tide is turning in so many ways for New Zealand farmers and there’s never been a better time to move from small statured, small producing cows to moderate sized, high producing cows which will last in the herd and give farmers the option of reducing numbers without a negative impact on production or productivity.

“We’re talking a line of genetics, specifically selected for the grazing environment which enable farmers to reduce their environmental footprint with fewer cows AND continue to make money,” Dyanne Osborne concluded.

Now is the time for dairy farmers to develop a pasture ‘road map’ to ensure they have enough feed to take their farms through calving to the balance date in mid-September.

Every mating season, veterinarians are called to fresh calved heifers presenting with unexplained severe forelimb lameness. This could be down to copper deficiency.

Heat detection with no tail paint

The latest device from the Irish maker, Moocall Heat, monitors cows for heat detection, centering on a collar worn by the bull to detect his activity as he moves through the herd.

How to improve on last year’s mating results

It's past mid-September and as calving draws to a close it is time to ensure mating plans are in place.

A trial is underway to measure the growth rates of Angus/Jersey beef calves from birth to finished product.