Passion and innovation in smaller herds 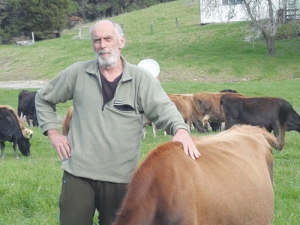 This season many sharemilkers are questioning their decision to go dairy farming, but Northland sharemilker Gavin Hogarth has tried different career options and smaller herd farming is the one that suits him best.

But the tough financial climate has led to strategic changes onfarm this year.

Six years ago Hogarth and his partner Jody Hansen shifted from Waikato to Northland to take up a job offer. They are now in their fifth season 50:50 sharemilking in the Bay of Islands. They are smaller-herd farmers, milking 180 Jersey cows through a 20-aside herringbone shed on the 60ha (eff) farm.

Dairy farming wasn't his first career choice. "I was brought up on dairy farms and in and around the dairy industry," he says. "But when I left school the last thing I wanted to do was milk cows. I did an apprenticeship with the Post Office, went to Australia and drove trucks and courier vans."

However, after meeting Jody, Hogarth had a change of heart and went to where he started, on a dairy farm. It has been the right move for him. "I get on well with animals," he says.

"They trust you a lot more than people. I couldn't work in an office with people; it would drive me round the bend. I also enjoy the challenge of it: getting what you can out of your cows."

Working with animals is not the only satisfaction Hogarth gets from farming in the Far North. "Someone said a while back that if you can farm north of the Auckland harbour bridge you can farm anywhere in the world, because it is so different from anywhere else. In Northland we can get 200mm of rain in one day in summer and you can see a swamp halfway up a hillside. This is a very wet farm, the annual rainfall is about 1200-1400 mm; last winter it was half under water."

Smaller herd farming suits Hogarth. He has worked in large herd businesses, but they weren't the right fit for him. "You get to know your animals," he says.

He believes many innovations have their genesis on smaller herd farms. "By necessity people on small farms have to come up with ways to fix problems themselves. If small farms weren't around I think a lot of No 8 wire inventions wouldn't happen because people aren't out there in situations where they have to come up with the solution to problems."

He also thinks smaller farms allow people to follow their dreams. "Probably a lot more work goes into breeding to fit purposes on smaller farms. I know a guy whose sole game is production. He milks 40 cows, winter and spring calving, and his cows average 600-700kgMS/year. That is his passion, seeing what you can get a cow to produce. You couldn't afford to do that on a big farm; you couldn't put that work and effort into it. Without little farms you are not going to get people who put their life into following their passion."

This season is particularly challenging for sharemilkers and the situation is no different for Hogarth. "To cope with the low payout we are milking OAD. The theory is that reducing feed demand – because the cows aren't walking to the shed twice a day -- will reduce bought-in feed. The impact of OAD on production has not been too dramatic so far this season; looking at a three year rolling average we are only 3-4% behind.

"Jody has also gone back to work full-time; it's the first time she has had a full-time job since we have been in Northland. She is working in Whangarei, about an hour's drive away."

Hogarth is on the Northland committee for SMASH (Smaller Milk and Supply Herds) and he gains much from his involvement.

"When you go to events you meet different people and you hear things from different perspectives. You get ideas for solutions to some of your problems as you find out how other people are dealing with them.