Plantain emerging from the shadows 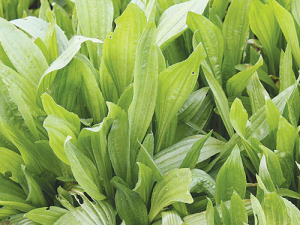 Nitrogen entering the soil from the urine of cows is a big problem.

Various ways of mitigating this have been looked at, and now scientists at DairyNZ are suggesting a solution for farmers in some regions. In a word, it’s plantain.

Mike Dodd, an expert in pasture, is seconded to DairyNZ from AgResearch to see what part new pasture species may be able to play in reducing the amount of N produced by a cow. It’s about the old theory – we are what we eat.

It is commonly acknowledged that ryegrass/white clover pasture typically has crude protein concentrations that supply more protein than animals need to meet their daily requirements. The protein is generally easily digested in the rumen and this means excess amounts of N are released in the form of ammonium in urine, in quantities greater than a grass patch can use, hence creating an N surplus which is now the subject of strict regional council regulations.

Dodd and other scientists have been trying to find other plant species that produce less N but without compromising milk solids production; it seems they have found a solution.

In the trials by DairyNZ in Waikato, Dodd says they produced various mixes of pasture species and grazed cows on these – a combination of tall fescue, lucerne and plantain and these have come out tops.

A fundamental problem of the urine from cows is a massive outflow concentrated in a small area -- almost like a massive injection into the soil and at it tends to penetrate deep into the soil. The challenge is to reduce the concentration of urine or find grass species that can utilise the N deep down in the soil.

Dodd says the trials at Lincoln and Waikato have consistently shown that plantain can reduce the concentration of N in cow urine by between 21-39%.

But the plantain solution may not be for every dairy farmer in every region. Dodd says there is a problem in the north of the North Island where plantain is susceptible to plantain moth. But in other regions plantain is able to persist right though seasons and last for five-six years. Dodd says it performs similarly to other grasses.

The field trials in Waikato were based on modelling work at DairyNZ which showed that tall fescue, lucerne and plantain, and combinations of these, were a possibility and would reduce N concentrations.

“The big thing was to ensure that while reducing N, the plantain mix would not reduce milk solids production, so it was a case of trying to get two wins at the same time. The studies we have done indicate that by using these alternative species you don’t lose milk solids production, but you do get a gain in reducing urinary concentrations and that’s a plus,” he says.

While the plantain works in reducing the amount of N in the cow’s urine, getting the cow used to eating plantain is not always simple. Dodd says cows are not overly familiar with plantain and anecdotal evidence suggests cows ignore plantain in the morning and go for the tall fescue and lucerne, but eat the plantain in the afternoon when it appears the sugar levels may be higher.

While Dodd is optimistic about the role of plantain in reducing N, he is also cautious about saying that even at this stage they have got the combination of plant species right.

“When I look at those pastures they actually look quite ugly because all three are what we call ‘bunch’ grasses, so there is a lot of bare ground in between them. It seems that may not be quite the right combination to maximise our ground cover and production but the benefit of including plantain in those pasture mixes is clear,” he says.

Dodd says the identification of plantain as a plant species which reduces N loss is unique to New Zealand, although other work on mixed pastures and improvements in seasonal productivity has been done overseas.

He says he’s sure that some farmers will be keen to apply this new science.

But he notes that more scientific studies are still being done to get an even better understanding of the plantain factor.