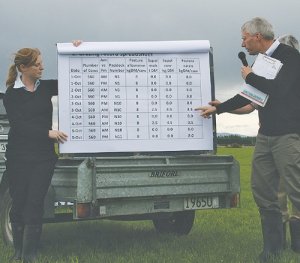 DO YOU know how much grass your best paddock produced compared to your worst? More importantly, do you know why some paddocks perform poorly?

Visitors to Lincoln University Dairy Farm’s first focus day of the new season heard how typically there’s a 100% difference in productivity between the best and worst paddocks on most dairy farms.

“It’s just ridiculous what the range is,” Agriseeds’ Graham Kerr told the focus day. Rather than regrassing by rotation, he says monitor production and select the poor performers. “The first principle is to monitor where the cows go. They might go to your best performing paddock 17 times a year, but only 12 times to the worst.”

Having established which are the poor performing paddocks, working out why is the next step. “If you’ve got an underlying problem and you don’t correct it you’ll just get the same reversion [to low output] again.”

Sometimes it is simply the wrong pasture species, but soil fertility, including pH, drainage, pests and compaction should be considered as possible causes too.

By picking the right paddocks the return on a reseed will typically be doubled. What’s more, the economic gain, which on average is about $1250/ha/year at a $6/kg payout, goes on year after year.

“That’s quite a compelling number, and it’s not just in the year you do it: it’s something that keeps on going. And you can be fairly confident that if [the poor paddocks] weren’t regrassed then they would have continued to decline [in productivity] so $1250/ha might be a bit of an underestimate of what the benefit is.”

When analysing grazing days a paddock provides allow area, number of cows, and supplements used at the time of grazing, says Kerr. Also any silage/baleage taken from the paddock.

“Our experience is that most dairy farms tend to analyse poor paddocks visually or by gut feel. There are better ways to do it,” he stresses.