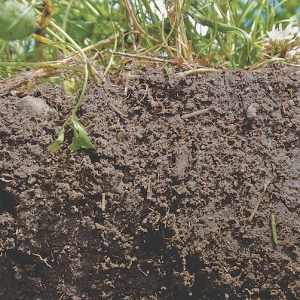 Cultivating and overgrazing can cause carbon losses in soil

RECENT RESEARCH shows some pastoral soils lose more crucial carbon and nitrogen than others. The reason isn’t known precisely yet but it could be important. Research continues.

What is known is that pastoral farms on certain soils (allophonic and gley soil orders) have lost an average of one tonne of soil carbon per hectare a year in some parts of the country.

Soil carbon is found primarily in organic forms, which make up soil organic matter (SOM), which includes other important elements such as calcium, hydrogen, oxygen, and nitrogen.

SOM, made up of plant and animal materials in various stages of decay, helps maintain soil structure, retain soil moisture and prevent erosion. It can also act as a reservoir for nutrients and as a source or ‘sink’ for carbon.

Increasing levels of SOM is likely to enhance soil biological processes and soil sustainability. A soil is carbon-positive if the amount of carbon sequestered (added or held) is greater than the amount of carbon lost through decomposition, leaching and volatilisation (nitrogen loss to the atmosphere as ammonia gas).

Determining the amount of soil organic carbon in soil is particularly important for understanding soil health and knowing the type of organic carbon present is also important as this can greatly impact soil productivity.

The amount of organic carbon in SOM varies significantly across soil types and the amount can be altered by management practices. In good soils organic carbon can be about 10% or more of SOM, while in many soils which are heavily exploited, levels are about 5% or less.

As indicated, soil management practice can affect these percentages. This is important as this can have an impact on the health and productivity of the soil. That’s because of their impact on losses of carbon from soil due to decomposition, and the conversion of carbon in SOM into carbon dioxide.

Cultivation and overgrazing in particular can both cause carbon losses.

Soil organic carbon inputs are controlled by the type and amount of plant and animal matter being added to the soil. Any practice that enhances productivity and the return of plant residues (shoots and roots) to the soil opens the input flow, and increases the amount of carbon in the soil.

For farmers, therefore, learning about the factors that influence soil carbon levels of their properties can benefit short-term productivity and long-term viability.