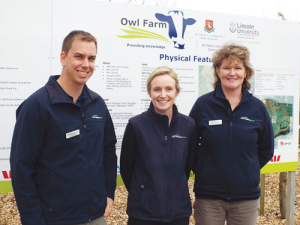 Students at a recent Waikato school farm field day scrutinised their growing and yield of chicory as a summer crop.

The event at Owl Farm – part of a St Peters School, Cambridge and Lincoln University joint venture – looked at, amongst many things, the value of chicory as a break crop in the region’s increasingly dry summers.

With PGG Wrightson Seeds veterinary agronomist Charlotte Westwood and agronomists Emma Bell and Kyle Gardyne, the group looked at all aspects of growing the crop.

Their first step had been pasture condition scoring to identify the poorest performing paddocks. The paddocks were rated from worst to best (score 1-5), the poorer being earmarked for cropping or re-grassing. Endorsed by the Pasture Renewal Charitable Trust and DairyNZ, this exercise takes account of bare or damaged areas, weeds, less vigorous grasses, sward density and clover content.

The students chose chicory as a high value summer feed for the 450 cow herd, based on consumption of about 2.5kgDM/cow/day. Seven paddocks were earmarked for sowing, totalling 12ha – about 8% of the farm’s 150ha (effective).

Permanent pastures were sprayed out and direct drilled in October 2015, at a rate of 8kg/ha, and grazing began in the second week of December; each was grazed four-five times in a 21-day rotation, finishing at the end of March 2016.

Overall the area yielded about 9000kgDM/ha – costing 7.4c/kgDM based on establishment costs of $666/ha. This cost should not be taken in isolation, the group says, because of the need to account for the value of the underperforming grass areas; these would be excluded from the supply chain between October and April.

With an estimated production of 4700kgDM/ha the chicory value was 22.6c/kgDM, similar to maize when feeding losses were taken into account.

For the 2016-17 season, the crop will continue to be used – not least for its being a good lead-in to pasture renovation – with a target closer to 12,000kgDM/ha; this is reckoned achievable with better attention to weed control and fertiliser during establishment and post-emergence.

The summary is that chicory has the potential to deliver a good protein boost mid-season, but the area needs to be increased to about 10% of the farm; the feed will help increase milk solids and cow condition scores, and will balance the energy cost of cows walking to grazing.

Gardyne also urges growing the crop against a ten-point plan for success: understand how much area is required, pick poorer performing paddocks, soil test in the autumn and pay particular attention to spray-out, and try to reduce the weed burden.

At planting, resist any temptation to start before soil temperature hits 12oC, split plantings for succession of availability, use slug bait to cut losses at emergence, and do not graze too early.

He suggests a regular ‘pull test’ 50-80 days after planting to ensure plants are properly anchored and not at risk of being pulled by stock, which would reduce total output.