Smaller herd, OAD – and the sunrise 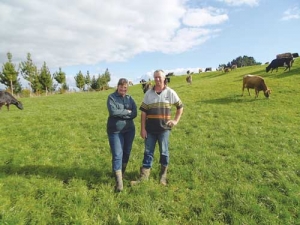 The strong working partnership of smaller herd farmers Matt and Sarah-Jane Yates has been a cornerstone of their farming success.

Matt started his career drystock farming on the family block, but its sale enabled him to buy his own property, deciding then that dairy farming was the more profitable way to go.

His next step was to buy a farm at Wharepapa South, near Te Awamutu, in 2002. He still farms there, with Sarah-Jane, who has been in dairy farming in the area from the word go.

The Yates’ farm is 98ha (85ha eff) of rolling country, milking 260 cows, mainly pedigree Jerseys, some Friesian and mixed breeds. So why did they decide smaller herd farming was the career for them?

“We like to know our cows and look after them,” says Matt. “They are not one of thousands: we don’t want to have a factory farm.”

Although Matt is now thinking about employing a manager, not having to deal with staff till now has been an added benefit. “Smaller herd farming keeps it in the family,” he says. Like many smaller herd farmers he sees training and managing staff an extra hassle.

Keeping it in the family has also allowed the pair to build an excellent working partnership. Sharing a mutual interest in the farm with Sarah-Jane has been a big plus for Matt. “Being on the farm every day makes for a strong team.”

They believe smaller herds offer substantial benefits to the community as well. “If smaller herds weren’t around it would be a real loss to the community,” says Sarah-Jane. “Schools in particular would suffer. We are already seeing the effects of the migrant workers, employed by larger farms, shifting in and out of the area.”

Matt and Sarah-Jane regularly attend SMASH (Smaller Milk and Supply Herds) events. They like the wide range of information covered.

“Networking with other farmers of a similar type is great”, says Matt. “It is almost like a little club. You don’t see the same people every time, but you do see a lot of them again and again, which is quite neat. You don’t get the same feel at other events.”

He believes having speakers willing to talk openly about more difficult or personal topics -- for example, Doug Avery’s session on battling depression on farm at the SMASH 2014 conferences -- breaks down barriers between people and adds to the inclusive feeling.

Matt always learns new information from SMASH events which is applicable to their business. When they were contemplating switching to OAD, coming along to an event on the subject was particularly helpful.

They are now into their second season OAD, chosen for its lifestyle benefits. This is working well for them, but they are always reassessing their system and tweaking it. This season, with the low payout, Matt is trying a number of different strategies, he says.

“We are trying to cut all the extra expenses. We’re going to cull early and cut cow numbers. Instead of buying maize in we will grow it at home, and we have changed from the more expensive meals through the shed to pretty much PKE with a little bit of added tapioca.” They are growing 4ha of maize on farm this season plus 3ha of turnips.

In the past Matt and Sarah-Jane ramped up farm production by utilising a lot of brought in feed, but Matt came to the conclusion that this strategy was not profitable enough for them, he says, “We did lots of production, but we didn’t make lots of money, so we have slowly been tapering off again.”

Despite the tough forecast for dairying Matt still enjoys farming, he says, “I like the outdoors, seeing the sun rise, being outside and working with animals.”

• Louise Hanlon is a committee member of Smaller Milk and Supply Herds (SMASH).