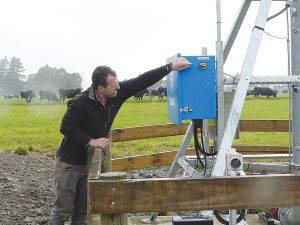 The farm has recently been transformed under Mitchell’s management -- and with the landowners, the Hayes family -- with comprehensive irrigation including nine pivots, a weather station and soil moisture monitoring, new fencing and stock water.

Internet-enabled SCADAfarm systems (supervisory control and data acquisition) tie it all together to allow Mitchell to manage his irrigation needs from a desktop or smartphone screen.

Trading as Hayes Road Grazing, Mitchell now runs the farm as a grazing unit for Spectrum Group, a dairying group with six farms in Canterbury and another four in Waikato.

Mitchell says the farm, long and narrow with a lot of public road crossings, wouldn’t make a great dairy farm but it operates as the dedicated heifer-raising unit for Spectrum’s Canterbury dairies.

At peak it carries up to 2400 animals and has about half that at the moment.

“Next month they’ll start turning up at 100kg and we keep them through to the following May (2021) so in 17 months we send them home in calf. That’s the plan.”

The bulls are now running with the mobs that are due to return to their home farms in 2020.

About 90% of the property is in permanent pasture and the rest in winter crop for the R2s – about 7.5ha fodder beet and 25ha kale.

The farm is on the Central Plains Water scheme and runs nine centre pivots (and some K-line) controlled by SCADAfarm Pivot,  SCADAfarm Weather and SCADAfarm Soil Moisture.

Mitchell says the system means he can irrigate “when we need to”.

He described the weather and soil monitoring system as “brilliant” because of the way it marries up ET  (evaporative transpiration) and recorded rainfall, along with 15-day forecasts, to provide advance notice of when irrigation will likely become necessary.

For each pivot, the smartphone screen shows where the soil moisture lies within its optimal “green zone” and allows Mitchell to start, stop, reverse or park it safely in case of predicted high winds.

It is still important for Mitchell to have eyes – and boots – out on the farm. He might, for example, inspect and manually start one pivot while using the smartphone to start a couple of others.

His CPW allocation allows him to run up to seven of the pivots at once.

“Instead of having to go round seven pivots manually every day I can check them once and them check them a couple of times on the phone.

“Otherwise it could easily take 1.5 hours each morning to get them going.”

Mitchell says the bottom line is that the SCADAfarm system is “something you need to have” for modern auditing and compliance requirements.

“You have to have some way of knowing what your soil moisture is doing now. I don’t think looking over the fence and seeing what the neighbour is doing is good enough any more.

“It allows us to keep growing grass. We know when we can switch off and when we need to switch on. So it allows us to grow grass efficiently and hopefully not have to buy in as much supplement to get through the leaner times.”

Vanessa Robinson, national water management manager for Waterforce, explains that the SCADA system was developed by Waterforce and Schneider Electric.

The key to the system is its internet-connected data management, with both historical and realtime data securely stored in cloud-based servers and accessed by customers on a subscription basis.

Robinson says the company currently has over 3500 clients, not just farmers but others including territorial councils. SCADAfarm Pivot alone has more than 350 units currently live throughout New Zealand.

She says some farms have halved their energy costs by changing their irrigation behaviour and taking advantage of off-peak energy rates.

“Not everyone has weather stations but for compliance or for auditing purposes now, you need to have some level of soil moisture monitoring to actually prove that you are only irrigating when you need to irrigate and you’re not losing any water through to drainage.”

Robinson says while ECan is very proactive in its region, the rest of the country is slowly catching up to better water management and SCADAfarm is “leading that drive”.

It is a wonderful tool used for the right reasons, she says.

Farmers need to show that they are auditing themselves, being compliant and only using irrigation when they should.

“People don’t realise how much farmers are investing in these areas. The benefits are huge for everybody.”