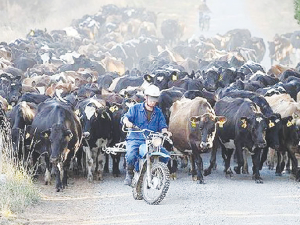 Animal welfare should be a top concern during Moving Day.

Animal welfare and good biosecurity practices, including complying with traceability requirements, are critical over this period.

Both DairyNZ and OSPRI urge farmers to follow advice.

"When NAIT compliance is compromised, our traceability system is threatened, and we run the risk of having a system that will not perform in the event of another disease outbreak," says OSPRI.

"We ask that farmers read and understand their requirements as we embark on the Moving Day period."

DairyNZ advises that cull cows be sent to a processing facility nearby.

"Only transport cows that are not likely to give birth during the journey or within 24 hours of arriving at the destination: if within four weeks of calving date, travel should be less than two hours."

Farmers must make sure that animals are fit for transport by checking for the following:

It is also recommended that farmers stand stock off green feed for at least four hours, but for no more than 12 hours.

A grazed-out paddock or stand-off pad are better options because concrete surfaces can contribute to tender feet and aren't good for lying.

Continue feeding silage, hay or straw during stand-off, especially for lactating cows or prior to long-distance journeys.

"Many farmers have plumbed in a basic water trough at the yards that can be filled while the yards are in use. Remember, this will be their last chance to eat and they won't get a drink until they arrive," it says.

Lactating cows need extra calcium, in addition to extra magnesium, on the day of transport. The extra calcium could be given as an oral drench, extra allowance of a calcium-enriched meal, or a slurry poured over dry feed.

All movements of cattle and deer between NAIT locations must be recorded in NAIT within 48 hours of them leaving one property and arriving at a new property.

All animal movements between NAIT locations must be recorded, even if:

All movements of NAIT animals to and from a registered NAIT location must be recorded in NAIT within 48 hours of the animals leaving a property or arriving at a new location.

Waikato Regional Council is reminding farmers to ensure machinery, vehicles and equipment are cleaned ahead of Moving Day.