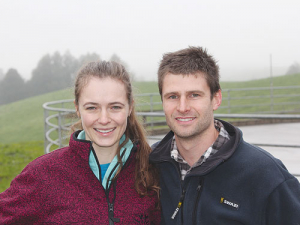 The Mounseys sharemilk a mostly Jersey herd in Otorohanga; with other young farmers Michael and Claire Newson and James Courtman they are involved in launching Jersey Profit to connect with the wider farming public.

Jersey Profit is expected to appeal to commercial farmers for its focus on economic indices, milk and meat payment equity and relevant research and promotion. It has secured funding from pioneer Jersey farmers and will be launched early next year.

Laura comes from a drystock background in Hawkes Bay and graduated from Massey University. She has worked at Fonterra as an accountant and is now an agribusiness manager with Rabobank. She is also studying for a chartered accountancy qualification.

Zach was raised on an Otorohanga dairy farm and studied at Waikato University. After graduating he worked in finance and economics with Fonterra and DairyNZ.

Zach says their Jersey herd was originally a once-a-day herd in Taranaki. They have been breeding for OAD and A2 qualities for six years, eyeing A2 supply premiums and ease of management over summer.

“There is no escaping that livestock farming is under the microscope on environmental footprint,” says Zach.

“A shift to a national composite herd of 11 parts Jersey and five parts HF would reduce the environmental footprint per unit of food produced by about 5%. This is a material shift. Any new initiative to get a 5% reduction in carbon emissions would get scientists highly excited ”

About 2% of the reduction would come from producing more milksolds per unit of feed, another 2% from reducing sustainable herd replacement rates, and 1% from more concentrated milk requiring less cartage, evaporating and farm effluent capacity.

Mounseys are also part of a three-year trial with Geenlea Premier Meats to measure the growth rates of Angus/Jersey beef calves from birth to finished product. Traditionally, in breeding calves for finishing, Jersey farmers have lagged behind Friesian farmers.