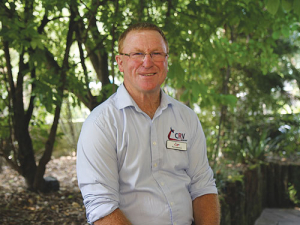 No one is more passionate about breeding better dairy cows than Ray Lawrence, Taranaki.

After 40 years working with local dairy farmers to breed healthier, more efficient herds, Lawrence is to retire from his field consultant and artificial insemination (AI) technician roles at CRV Ambreed.

He started at CRV Ambreed in 1976 when he trained in AI and began using the firm’s genetics in his own dairy herd.  In 1983, Lawrence started working as a Stratford-Etham field consultant and in 1991 took on the broader Taranaki region as area manager.

Always passionate about helping farmers breed a healthy, long-lasting herd via pedigree bulls, he says this motivated him to stay at it a long time.

“It’s gratifying than to drive around the region each year and see the calves in the paddock that I’ve had a part in creating,” he says.

“Still, walking away from the relationships I’ve built with clients will be the hardest part of retiring.”

Lawrence applauds the new technologies that have hugely improved the industry.

“SireMatch has supported farmers to breed from good cow families and prevent issues like inbreeding and genetic defects have been a real game-changer,” he says.

“I’d like to see the wider industry herd-testing more in the future to make sure we all have access to better data and that we can improve our whole industry.”

Sales and marketing manager for CRV Oceania Mathew Macfie says Lawrence’s legacy will be visible on farms in the Taranaki region for many years.

“His knowledge of cow families and pedigrees in particular has been called on many times to help build the perfect bull team for many customers,” Macfie says.

“On the dairy farms in Taranaki, it is not hard to see the kind of cow or herd that Ray is proud to have been associated with and help build.”

The next chapter of Ray Lawrence’s life will centre on family, including wife Joyce, four children, and nine – soon to be 10 -- grandchildren.

He also plans to travel and will continue volunteer work with Lake Rotokauri Trust and the Lions club in Etham.

Although putting away his AI gloves, he won’t be letting go of his gumboots.

“After all these years I can walk away knowing that I’ve done my part. But I’ll still have my finger in farm life doing the odd bit of work on my son’s farm,” he says.

Herd genetics not only about money

Selecting the right genetics is no longer only for improving the economic output of a herd, says CRV Ambreed sales and marketing manager Jon Lee.