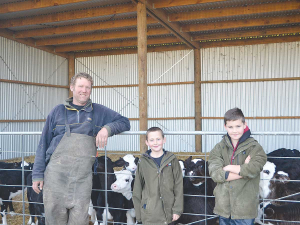 Rob and Nicola Bassetts’ herd is made up of 410 spring-calving Holstein Friesian cows and up to 50 cows, which calve in December.

“No other farms in our area calve in December. We are quite unique. We started doing it seven years ago,” Rob Bassett claims.

“Milk production jumped by 18,000 kgMS in that first season.”

The shift to Christmas calving was driven by the farm’s soil type. The land, which has been in the Bassett’s family for 109 years, sits on a drained swamp.

“We have a completely different type of soil to our neighbours. The property is wet in the winter, but it grows grass in the summer,” he explains.

“We had to think outside of the box to get the most out of the farm.”

Instead of empty cows being culled when livestock prices are low, they are kept milking and run with Hereford bulls in March.

Cows that get in-calf are dried off with the rest of the herd in late May. They follow the milking herd in the spring and tidy up uneaten grass.

“Having a higher stocking rate at that time of the year is extremely beneficial,” Bassett says.

“Those dry cows help us hit residuals and maintain pasture quality and it means we don’t have to top paddocks with a mower.”

The cows, usually 40 to 50, calve in December and are milked until late March or early April, when they are solid to a winter milk producer.

“They produce cheap milk for us because we can grow between 130-150 kg/DM/ha of pasture a day in December and January,” he said.

The Bassetts calves are sold to a rearer.

Eighty-five hectares of their farm is irrigated with a centre pivot. Water is sourced from a bore, with no restrictions.

“We have an instantaneous take of 45 litres of water per second and we are guaranteed 150 days of irrigation every 12 months,” Bassett says.

“It doesn’t take much to keep our soil wet and in the last decade we have only used half of our yearly allocation.”

The farm is well-equipped to combat weather extremes, such as a drought. It has a 40-bale rotary milking shed with in-shed feeding and a 450-cow feed pad.

“Our annual milk production has only fluctuated by 2,500 kgMS over the last five years.”

The herd is fed crushed barley, which is grown on a 129-hectare support block, five kilometres down the road. That block of land is not irrigated.

The Bassetts grow 70-80 hectares of a barley each year, which they plant themselves using minimum tillage practices.

“The soil at the runoff is quite stony, but we have noticed a huge difference by not disturbing it as much,” Bassett explains.

“We’re onto our fourth and fifth rotation of barley in those paddocks and we now plant into black soil, rich in organic matter.”

The barley is stored in silos beside the milking shed with a combined holding capacity of 400 tonnes.

“We feed about 350 tonnes of barley through the shed each year. We crush what we need each day and add minerals to the mix,” he adds.

The Bassetts started growing their own barley to give them more control over feed costs.

“We can grow it for a third of the cost of what we could buy in straight barley for. It’s a huge saving,” Cameron claims.

The straw left behind, after the crop is harvested, is not wasted.

It is baled and used to hold the cows’ gut capacity and give them fibre while they are on a winter kale crop at the runoff block.

Growing all their own supplements has led to major changes in young stock management.

Replacement heifers are now grazed with Wanganui Vets from May to May, leaving just 70-80 R1 heifers at the runoff.

“We aim to have them weighing 240 kilograms when they go to the grazier,” Cameron says.

The heifers arrive home from grazing weighing 525kg and calve at 550kg. The Bassetts mature cows weigh an average of 600kg.

The heifers are mated to Ezicalve Hereford bulls, sourced from Mike and Cath Cranstone.

Robert Bassett is a trained artificial insemination technician and does his own AI for six weeks.

“We used to use LIC’s Premier Sires bull team, but we switched to the company’s economy pack when the payout dropped in 2014.”

Cameron says they have continued using that pack, as he believes it’s good value for money and they only use semen from daughter-proven sires.

“The price of semen is important to me. If it is Holstein Friesian, the price is right and the bull has plenty of daughters, then I will use him,” he explains.

The spring herd’s empty (not in-calf) rate sits at 14-15%, but the figure is only 2-3% across the entire herd. The Bassetts have one staff member, Andrew Pike, who is an integral part of the business and has been with them for 28 years.

Rob’s father Don, who has lived on the farm for the past 75 years, also helps out.

The Bassetts joined Holstein Friesian NZ in 2005, when they started leasing a neighbouring farm and bought the pedigree herd on the property.

“We saw how favourably our grade cows stacked up against the pedigree animals, so we began registering them on the supplementary register,” Cameron says.

About 75-80% of the herd are now registered pedigree Holstein Friesians.

“It’s very little extra work for us to register the calves each year and has increased the value of the animals if we ever wanted to sell them,” he adds.

The couple have two young sons Campbell, 12, and Lachie, 10.

“Both boys are really interested in showing calves and the farm,” Cameron says.

“It’s a driving factor behind how we operate. We’d like to do further expansion in the future to help both of them get into farming.”

The calving season on the West Coast is progressing well with the help of good weather, says retired Federated Farmers president Katie Milne.