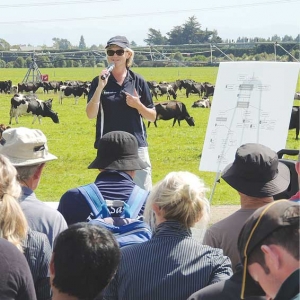 The hot dry summer and a strategic move to use less nitrogen is taking its toll on the Lincoln University Dairy Farm.

The feed wedge is looking flatter than normal with an average cover of 2346kgDM/ha at a February 19 focus day and despite having ample irrigation average pasture growth has tumbled to 48kgDM/ha.

Speaking to Dairy News after the event LUDF farm manager, Peter Hancox summed it up as “a shit season”. “The biggest driver for that has been the quality of the grass. We’re not sure how much of that has to do with using less nitrogen but it’s very much been the season: hot and dry through December and January… The pasture kept trying to go reproductive.”

That reduced pasture quality and December’s production was down 11% on November’s, and in turn January it was was down 9% on December. That compares to monthly declines of about 4% and 7% in those months for the previous two seasons.

Pasture growth appeared to be keeping up until the end of January but that too has now “dropped off the cliff,” as one focus day speaker put it. Hancox says not using any nitrogen fertiliser in January, in line with the farm’s self-imposed limit of applying 150kgN/ha in the 2014-15 season, is probably to blame. “We’re saving it for later.”

With that reduced nitrogen pastures have become increasingly uneven with urine patches plating at 4000kgDM/ha at start of grazing, but the bits in between 2500kgDM/ha. Round length was 21 days leading up to the February 19 focus day and average body condition of mixed aged cows had dropped from 4.3 to 4.1 in the fortnight prior. A decision to cull 75 had just been made.

PGW’s Charlotte Westwood, a member of the farm’s management team, urged focus day visitors “to do a partial budget” when making cull decisions, and if supplement is being used, cost culls as if they were being fed 100% supplement – 18.5kgDM/head/day at 43c/kgDM in LUDF’s case – as the pasture they’re eating is grass that could replace supplement.

“At best they’re cost neutral and at worst they’re going to be losing you money by keeping them in milk,” she said.

Westwood said fertility would be “an important discussion” for LUDF’s next focus day, May 7, as six-week in-calf rate had fallen from 78% to 72% despite a “pretty damn good” submission rate of 89% at three weeks. “It tells us conception was an issue, as opposed to submission.”

However, obvious factors had been ruled out, hence the decision to delay the discussion to allow for more analysis.

Having set out to achieve 500kgMS/cow this season, Hancox says he now expects 460kgMS/cow will be the end result, which in a herd of 560 means the farm will finish about 20,000kgMS below budget.