Winning the contest was a bonus 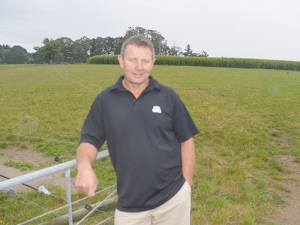 As chairman of Smaller Milk and Supply Herds, he was asked at a SMASH conference to urge members to enter the pasture renewal persistence competition, run by the DairyNZ-led pasture renewal leadership group.

Last month Rust hosted farmers to talk about his winning paddock, a 10-year-old mix of Alto and Arrow ryegrass.

He told Dairy News his main aim in entering was to give his new farm worker exposure to the judges.

"When the judges came to inspect our paddock I picked a good one that I knew was always growing well," he says. "When I knew I had won, it was pretty humbling."

Rust told farmers at the field day that he was not doing anything different from them. "I told them they all have paddocks which could have won; we just happened to enter the competition and had a good paddock that lasted well for a number of reasons."

Rust and his wife Bev bought the 52ha eff farm in 1996. For the first 10 years they ran it as a low input system; only a small amount of baleage was bought in each year and heifers were grazed off-farm.

Rust says after 10 years they decided they needed another challenge. "We got as far as we could with system 1 so we thought of building a feed pad and importing maize.

"The idea was to lift cow numbers to 200 and gain more profit."

In 2006 they increased stock numbers to 200 cows and bought maize silage and PKE; they also built a feed pad.

In 2011 they bought a 24ha runoff in partnership with another farmer. This is used for growing maize silage which is brought back to the milking platform. The farm now averages 90,000kgMS with 200 cows, taking its per ha yield to 1750kgMS/ha or 450 kgMS/cow.

"We use supplements only when pasture runs out; we are not substituting grass. To do this we must have good paddocks; good pasture management requires dense sward and proper residuals. We do this with a high stocking rate, by avoiding both overgrazing and pugging."

Rust follows a sound grazing management plan. In the summer, morning milking is finished by 7am. Cows stay in the paddock until noon and then move to the feedpad. After they have finished at the feedpad they move to the standoff paddock under the trees.

If it is still dry and the hot months have finished, cows will stand off in next season's maize paddocks, he says.

"As soon as the autumn rains arrive the cows go out to a 70 day rotation for three weeks to allow average pasture cover to increase, then onto normal autumn rotation lengths."