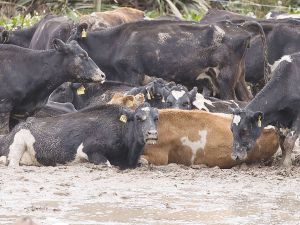 Cows in a muddy paddock in Southland. Photo: Angus Robson.

DairyNZ Director Ben Allomes says farmers need to change with the times and adopt practices that are good for their animals and the environment.

He was responding to Greenpeace criticising ‘mud-bound cows’ in Southland, pictured in a paddock being fed winter crops.

Allomes says if farmer in 2019 think they can farm for the next 10 to 15 years without any change to their systems then they are kidding themselves.

“They must hold up a mirror and say, ‘hang on a minute, change has always come and I have to keep changing with it’. There is no status quo.”

Many farming practices are not fit for purpose in the environment in which they are occurring, he says. Each farmer needs to understand their particular property and manage their resources so as not to harm the animals or the environment.

“There is no silver bullet for dealing with this and that’s what makes it such a challenging topic.

“Let’s face it, some farmers get it wrong or are victims of circumstances beyond their control such as serious floods, storms or being let down by others. So let’s not throw them under the bus, but rather work with each other for better outcomes.”

Allomes says winter grazing, overall, is not a major problem in New Zealand, but in certain key regions and even catchments there can be problems if farmers don’t properly plan their winter grazing. Not only catchments but also soil types can make a huge difference and this demands farmer awareness.

Farmers need to have a good plan and contingency plans to deal with unforeseen events, Allomes says. They must get it right. Getting it wrong will be costly to them and the environment.

“It is a matter of weighing up the natural resources of their farm and assessing the impacts of winter grazing.”

Allomes refers to a lot of work being done to design better farming systems to avoid some of the problems highlighted recently.

Farmers are innovative and open to change, making farming an exciting industry to be a part of, he says. Innovation will create great farms and attract great people for the future.

Federated Farmers president Katie Milne says while the concept of feeding crops to cows is fine, it must be managed.

But change is inevitable and what was acceptable 20 ago is not going to be acceptable in future. Crops are good for feeding cows well during winter, but not at the expense of the environment.

Milne urges looking hard at farming best practice. Some practices from the past will not be appropriate for the future.

“We have to farm under new rules as part of our way forward and we have to accept that change is going to come at us. We need to look for and get the best systems we can.”

Milne says if farmers are going to grow winter forage crops they need to look carefully over their farm to determine the best place to put these to feed the cows with minimal environmental impact.

“There are many ways of farming a farm and every individual has to look at what their own system is and what can they can do to get their animals fed to the right level.”

Perception is the reality and an individual’s licence to farm is there for everyone to see.

An AgResearch scientist has weighed in on the value of farmers grazing winter forage crops, saying this seriously harms the environment.

Professor Richard McDowell says 20% to 40% of agricultural contaminants come from forage crop areas despite their occupying only 10% to 15% of the average farm.

About a third of contaminant losses from winter grazing of forage crops can be mitigated by a range of strategies.

“These include restricting grazing by only allowing stock on the crop for three or four hours before they go to an area where all effluent and urine can be captured rather than deposited on the paddock.

“Also by ensuring that where possible cows are kept off the remainder of the paddock by using back fencing.

“Another option is to apply alum (aluminium sulphate) to forage crop areas after animals have grazed to decrease phosphorous losses to surface run-off,” he says.

McDowell says where fodder crop is grown on a sloping area, animals should be fed at the top, working down to the lower areas. This will minimise the time the cows spend on muddy areas.

And in some areas prone to being wet, an option is to cut and carry to a feed pad where dung and urine can be contained.

Winter cropping has been developed because of the economics and simplicity of it, McDowell says.

“Another alternative is the herd home, which stacks up environmentally and with the right economics.”

Anecdotal evidence suggests farmers are taking up the options he has presented.

All go for dairy workers

DairyNZ says some of the people who have completed their training programme – GoDairy are already working on dairy farms.