An amazing life as a vet 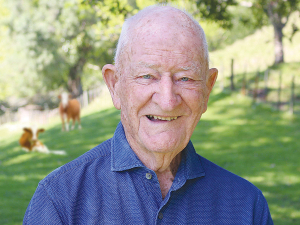 Graham Wallace, one of the country's oldest veterinary surgeons, passed away recently.

Graham Wallace, one of the country's oldest veterinary surgeons, passed away on October 29 in Auckland after a very long, active life of 96 years and short battle with cancer.

Graham's early life was in Auckland where he attended Auckland Grammar School.

He started a BAgrSc degree at Massey University in 1945 but was enticed that year to veterinary study by the dearth of veterinarians needed after the War under the Veterinary Services Council Club System.

The Bursary was funded equally between the Wool Board, Dairy Board and Meat Board and driven by Alan Leslie, a Hawera vet who Graham regarded as the father of the profession. The bursary was for study in Sydney as this was before the Massey Vet School began in 1963.

Graham began for Sydney in 1945, shortly before VE and VJ Days, and he had to get to Sydney on the original Wahine avoiding a German raider still sinking ships in the Tasman.

Graduating in 1949 and then marrying Joy Gemmell, he joined the Veterinary Club system as demanded by his Bursary and, after as practising student under Gordon Yockney at Papakura, had sole charge at Maungaturoto with 400 farmers and 20,000 cows that saw seven days a week from 6am to midnight for three months engrossed in difficult calvings and metabolic diseases.

In 1952 Graham was enticed back to a quieter life in Auckland with the then Department of Agriculture (now MPI) for Tuberculosis and Brucellosis control plus quarantine. The highlight of that era was in 1959 being selected to represent New Zealand at a WHO seminar on zoonoses in Japan.

Promotion in the department would have meant a shift to Wellington and after soul searching with an established family in Auckland, he decided to take up an offer from the Wellcome Foundation under the Cooper name. Thus 1960 to 1987 enabled Graham to concentrate on his interest in microbiology and a change of philosophy from cure to prevention. For over 20 years he led the vaccine production laboratory at Otahuhu, Auckland. Wellcome were then leaders in animal vaccine manufacture.

The Auckland Wellcome unit achieved a world first in the combination of a Pulpy Kidney vaccine (PK) with a tetanus antitoxin to give PK/ Antitet for use on lambs at docking, unique to New Zealand. They also made, over 50 years ago, the first multicomponent clostridial vaccine with a 16 week passive immunity claim (ewe to lamb) called Multine 5.

Graham led the development of the first leptospira vaccine (Leptavoid) along with inactivated salmonella (Salvexin) as opposed to attenuated overseas products. The unit also made the first campylobacter vaccine (Campylovexin).

In 1975 Graham was elected to NZVA on which he served until 1984, with 1981 and much of 1982 as president. In early 1984, Duncan MacIntyre, the Minister of Agriculture, asked vets to take the cost of the discipline rather than the taxpayer, so Graham, with Ken Thomson and Bill Manktelow, drafted The New Zealand College of Veterinarians Bill, 1984.

After the merger of the Wellcome and TVL businesses, Graham retired in 1987 but remained a consultant to Wellcome and technical adviser to Ancare. He maintained an active interest in the agricultural industry until his death, regularly commenting on industry affairs.

Colin Harvey is a businessman and former owner of Ancare.

Ag innovator and contributor leaves his mark on sector

Colin Harvey, one of the NZ agri-sector’s foremost innovators and contributors, died in a drowning accident in late January.

Colin Harvey (ONZM), one of the NZ agri-sector’s foremost innovators and contributors, died in a drowning accident in late January.