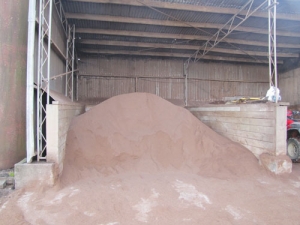 Fonterra’s advice on PKE use is causing a stir among farmers.

Fonterra advice on using palm kernel extract (PKE) has caused a stir amongst farmers throughout the country.

I was at the World Dairy Summit in Lithuania when this surfaced; despite being half a world away, I saw Fonterra's guidance go down like a lead balloon.

Once again Fonterra's communications have let them down; the initial media release was lacking in detail, before the story predictably began to change.

Both are justifiable reasons for Fonterra to come back to farmers and tell us there is an issue to address; but they need to be upfront as to what the actual situation is.

There are reasons why we should be informed and why we should take action. The farm is the first stage of the food chain that delivers nutrition to the consumer.

We need to know clearly and unambiguously what exactly the consumer wants. We also need to ensure they get the experience they want, and if there are quality issues we need to understand those too.

Most customer experience stems from what happens onfarm so we should ensure that what happens onfarm is in line with what the market wants. If we ignore what the customers want, they will duly switch to people who can cater to their tastes. So if there truly is a premium for pasture based produce then we need to know.

However, will this guidance actually do anything to encourage farmers in the right direction? Some perhaps, not all.

Here's the issue: I'm a farmer who uses a lot of PKE and I have a neighbour who does the same. I reduce stocking rate to reduce PKE usage and help with the marketing image, or the quality control issues, but my neighbour doesn't.

If the positive image persists then, yay! I get a pat on the back for upholding the industry's image and a premium price.

Meanwhile my neighbour makes more milk and benefits from that premium price too. But if there are too many like my neighbour and our reputation and premium take a hit, then I take the hit in price along with my neighbour, though he still produces more milk.

We are relying on everyone to think about the greater good and ignore the individual benefits from going against that greater good.

If the issue was quality, arising from, say, somatic cells, then again Fonterra's 'guidance' has the same problems: those who act on it get no extra and again end up paying for those who don't.

So if we want change let's signal that desire for change with a price signal. Other companies, such as Synlait, take such an approach. For me, if Fonterra is concerned about the use of PKE and other such factors, then providing that price signal is important.

So for consumer perception the price signal could take the form of some sort of bonus. In respect of quality issues it needs to be treated as somatic cells would be, for example.

I would have handled this PKE issue differently: first an upfront discussion with all industry players, then an airing of the issue on the director's roadshow, then getting rid of the bloody spin.

If the issue is milk composition then say so, and we can start talking about how this would be tested and what the demerit system would look like. If it is truly about consumer perception, then again talk to farmers and get their feedback on the best way to tackle it.

Fonterra's intention is likely correct; the execution and communication with farmers is sadly lacking.