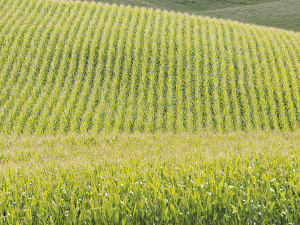 Some farmers planning to grow more maize on their milking platform or support land.

As I write this, the Omicron wave is cresting across the nation, Russia is attacking Ukraine, and inflation is predicted to climb to a 30-year high of more than 7% by the middle of next year. Milk, meat and grain prices are at an all-time high meaning excellent returns for farmers who can increase their production. But on their production, farm costs are rising. Fuel and fertiliser prices are through the roof. High global prices and shipping challenges, (availability of ships and cost of fuel), have led to dramatic rises in the price of imported feeds. For example, PKE has risen from aroun $280/t in March 2019 to $470-480/t (53 c/kgDM) in March 2022.

My colleagues and I are regularly hearing from farmers who want to control their feed costs. Many are considering growing more feed on farm to try and dilute the rising cost associated with bought-in feed. We are already being approached by farmers planning to grow more maize on their milking platform or support land. Others are looking for land they can buy or lease to grow more maize for the coming season.

For many farmers, growing some maize silage on farm makes good sense. If the farm has dropped cow numbers and has surplus spring feed, if there are paddcks that need renewing or if there are excess nutrients to be cropped out, growing maize will usually provide high yields of quality feed at a low price.

However, while growing maize on farm may look cheaper at first glance, it is important to do a full analysis of the numbers. Actual maize yields, therefore accurate costings, need to take into account pasture forgone from that from that paddock. A 22tDM/ha crop may have cost you only 15c/kgDM to grow and put in the stack. However, if the paddock would have grown 10tDM/ha in pasture over the same time it was in maize, your net increase in feed is only 12tDM/ha.The cst of that feed is now 28c/kgDM. This is still cheap feed compared to PKE at 53c/kgDM but not quite as good as it seemed at first glance. It should be noted that lower yielding crops (e.g. turnips or chicory) look even more expensive when pasture foregone is considered.

The proverb says the early bird catches the worm. Likewise, well planned farmers tend to make more money as they are in the market for land, feed or whatever, well ahead of the rest of the crowd. If payout projections for this coming season eventuate, there is going to be significant pressure on both feed supply and price. While many of us remember the crash in milk price halfway through the 2008-09 season as a result of the global financial crisis, the reality is that well planned farmers were less affected. Many had secured their feed for the coming season at a reasonable price. They had also paid off a significant also paid off a significant amount of debt as a result of the previous season's high payout.

There is little extra feed available at the moment but planning now can help you manage feed supply and cost for next season. If you plan to buy in maize silage in autumn 2023, talk to your contract grower now and commit to a volume. You may even be able to come up with a price per kilogram of dry matter that works for you both.

If you have enough maize silage to keep milking to the end of the season and cow condition is good, keep milking. With the high projected payout, it makes great sense.

However, don't be tempted to keep milking this autumn because the payout looks great and compromise your ability to meet calving body condition score (BCS) or projected spring pasture cover targets.

Filling short term feed deficits and getting mature cows to body condition score (BCS) 5.0 and first and second calving cows to BCS 5.5 will give you the best return on supplementary feed. In contrast, starving cows or having to feed a lot of supplements in the spring because you milked on too long in the autumn, is seldom profitable.