No bull in proper effluent management 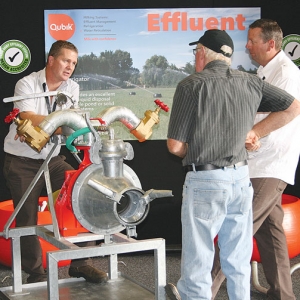 I never thought when I entered farming politics that there would be so much talk about the stuff that comes out of the back end of a cow.  The polite term is ‘effluent’ of course; not polite are its effects and the costs of managing it.

Waikato Federated Farmers has the task of holding our regional council to account when warranted, and effluent is a big bone of contention. But they have a job to do, as we do, so it’s sometimes important we celebrate them. Just as farmers often feel criticised by the media, I imagine councils do too, giving the public an ill-informed perspective.

In the past six months Waikato Regional Council has set up an effluent working group of councillors, council staff, dairy industry leaders and myself, for better management of the issue. The region will be better for this unique model, which should be available in the next six months, and I thank everyone for their participation in this group.

No one is going to forget the Okororie issue, with the prosecution of Hold the Gold Ltd, any time soon, but to the council’s credit it has acknowledged the problem and is acting on it.

It recently organised a meeting with local leaders, including the chief executive officer, to discuss what to do.

The meeting was positive and constructive and everyone hung around to socialise afterwards. Such community leadership, with engagement and listening, builds positive relationships and trust.

For example, the council’s Variation 6 rule requiring everyone with a cowshed to get water consent to wash out effluent. Amy King, Variation 6 farm water project manager, and her staff, lead a group that resulted, with industry support, in 100% of dairy farmers applying for one.

This engaging and inclusive approach gained a lot of respect from people outside the council.

The mecca for effluent discussion – Effluent Expo Day last week at Mystery Creek – is said to have attracted more farmers this year than last (600 attended in 2014); a great result for the organisers. Federated Farmers had many people in its tent responding to an effluent survey; the general mood was positive. Farmers asked what the landscape looks like for the future and what they can do improve their effluent systems.

That’s an indication of the dollars earmarked for, or spent on, effluent handling and the environment.

In the last 12 months my family farm has spent well over $250,000 on improving our effluent system and native planting.

These projects have been successful and have taught me lessons. It pays to look at a lot of systems and ask where your farm will be in 10 years. Attending events such as the Effluent Expo Day will keep you informed about what is right for you and your farm.

It is important to get it right the first time. A few of my past projects, over-engineered yet only just big enough a few years on, have taught me not to build too small lest I should have to built bigger, later.

After all, even when a council is doing its best, the consenting process isn’t fun or cheap – not something you want to repeat unnecessarily.

The expo showed we are all serious about getting great results for our industry by working together for positive change.

Part of that requires collecting data on our progress, such as how much farmers are investing along the way.