Too late to plant maize silage? 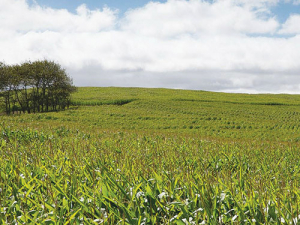 What is the ideal planting window for maize silage?

About this time of the year, we always seem to get calls from merchants and farmers asking several versions of the same question: “Is it too late to plant maize silage in November?”

The next question we usually get is “If it is not too late, do I suffer any yield penalty by planting in late November?”

In the past, we tended to say based on experience that it was fine to plant maize in November and you shouldn’t suffer much yield loss, but we didn’t have any actual data to go on.We also used to say (based on US data coming from the grain industry) that the earlier you plant the better because you maximise sunlight harvest and therefore increase the crop’s yield potential.

Fortunately for NZ maize growers, in 2011 a colleague of mine, Dr Rowland Tsimba, completed his PhD at Massey University. Amongst a number of things studied, he looked at what is the ideal planting window for maize silage by region and what, if any, is the potential yield loss if the planting date is delayed.

A planting window is the period between two dates when it is best to plant maize. Rowland’s work showed that with maize silage, early planting doesn’t necessarily mean that you will optimise yield potential.In fact, his work showed that each region has quite a wide planting window during which there was no difference in yield potential if you planted on one day as opposed to another.

Rowland’s work also showed that while there was some drop-off in yield potential through planting later (mid-late November), it was nowhere as great as some people feared. Once again there are a lot of factors involved (e.g. region, hybrid maturity and season) but in the situation where you were having to plant mid-late November, as opposed to mid-October, the reduction in yield potential was only about 6-10%.

Rowland’s work enables us to quantify just how much this yield loss will cost you. Let’s assume that your maize silage planted 20 October yields about 20 t/dmha and it costs $3800/ha to grow and harvest.This means the maize silage costs you 19c/kgDM.Now let’s assume you have to plant on November 20 which reduces your yield potential by 10%.Instead of yielding 20 t/dm/ha you now yield 18 t/DM/ha.Your costs to grow and harvest will stay much the same as most of the costs are fixed.Despite the lower yield the cost of feed only goes up by about 2c/kgdm to 21c/kgdm.

This still makes later-planted maize some of the cheapest feed around.Compare this to bought-in grass silage.Everyone knows that the price of feed rises when the dry kicks in.Let’s assume you are offered a 180 kgdm round bale of silage.At 21c/kgDM (i.e. the equivalent price for late-planted maize silage) you would need to buy your grass silage for about $38/bale.That simply is not going to happen.Going on past years, an $80 bale is good buying.At this price, the cost of your grass silage is 44c/kgdm — double the cost of late planted maize.

It is very important to look at the hybrids you choose if you are in a situation where you need to plant later. Some traits to consider are drought and leaf disease tolerance as the chance of either one of these increases with later planted crops.

Talk to your merchant or Pioneer rep as they will help you best choose a hybrid that will enable you to plant later and yet still get your new grass back into the paddock on time.

• Ian Williams is a Pioneer forage specialist. Contact: This email address is being protected from spambots. You need JavaScript enabled to view it.