Britain could crash out of EU 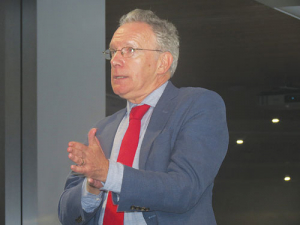 There is now a 50:50 chance Britain will crash out of the European Union without any sort of deal concluded, says a recognised Irish commentator.

He told the Irish Business Network in Auckland that with no substantive progress being made in the UK’s negotiations with the EU, a no-deal exit by Britain is on the cards.

He described Brexit as a “lazy fantasy, politically reckless and stupid” and always susceptible to failure. But though Theresa May is not an impressive person or leader, says O’Toole, he doesn’t believe anyone else in the Tory Party could do a better job.

At the core of the problem is a resurgence of “English nationalism” akin to ‘Trumpism’ in the US, he said, accusing leading Brexiteers such as Boris Johnson as playing games with the English people.

O’Toole claims that some supporters of Brexit have cynically moved the headquarters of their own business operations to Ireland because they can see the problems looming in Britain.

He says the fundamental stumbling block to Britain doing an exit deal with the EU is its inability to come up with a practical, politically acceptable solution to the insoluble problem of the border between the Irish Republic and Northern Ireland.

May has tried to get a deal, but the latest response from Michel Barnier, the EU’s chief negotiator is that her plan to avoid a hard border is an “invitation to fraud”.

“The pro-Brexit people don’t care and never thought about it.

O’Toole says Ireland will suffer hugely under Brexit. Already the mushroom industry in Ireland has gone bust and farmers are being badly hit because of the fall in the value of the British pound. And although people may think the Irish economy has gone high-tech and multinational, like NZ’s it still depends on land-based industry, chiefly farming.

“It’s still very much founded on the beef and dairy industry and all the spin-offs from those in high quality food. The main market for small-medium Irish food companies is and always has been the UK. That’s the geography and the history. They are going to take a real hammering.

“Nowadays a lot of the agricultural industries are cross-border. Most of the milk produced in Northern Ireland is processed in the south and they then export it to the north.”

Fintan O’Toole says while NZ is not top of the agenda in Ireland regarding Brexit, people are aware of what happened to NZ when Britain joined the EEC (Common Market) in 1973. They remember how NZ was suddenly abandoned and how things moved against us.

“This is a reminder from history that you can’t make assumptions about what your markets are and how they will continue in the future.”

The prospect of Brexit dismays and distresses O’Toole. He is fond of England and the English and says relations between the two countries are the best they have been for centuries. The visit of Queen Elizabeth in 2011 was a high point in building the relationship, he says.