EU dairy exports on the rise 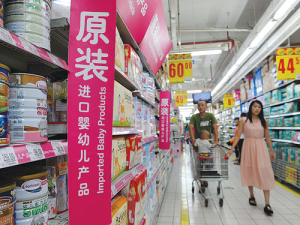 The infant formula market in China continues to grow.

This is despite China’s imports being 12% up in the year to September 2017 and increasing a whopping 34% (53,000 tonnes) in September versus the same month last year.

Fonterra Australia dairy exports were down 3% both in September and for the year to September 2017.

Meanwhile the latest figures show European Union dairy exports rose 5% in the 12 months to July 2017 and 10% (40,000t) in July versus the same month in the previous year.

Exports of SMP increased significantly, up 70% (30,000t). Fluid and fresh dairy and infant formula also had solid growth, up a combined 9%. This was partially offset by declines in whey powder, down 16% in July.

Exports for the 12 months to July were up 5% (227,000t) on the previous comparable period. SMP, infant formula, cheese and lactose exports increased significantly, up a combined 265,000t (13%), offset by declines in fluid and fresh dairy, butter and AMF, down a combined 56,000t.

This was the second consecutive month of declining US exports.

Leading China’s increase in imports were WMP, infant formula and SMP, up a combined 96% (33,000t) in September.

“Imports continue very strong into China, with almost all categories showing growth this year: WMP, infant formula and SMP grew the most, up a combined 22% (179,000t),” the Global Dairy Update says.