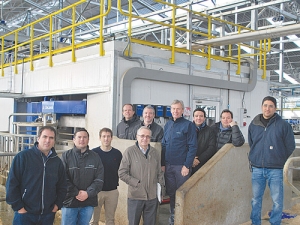 A 6500-head dairy farm in Chile will become the world's largest robotic dairy after signing an agreement to install 64 DeLaval VMS milking robots.

The farm, owned by AgrÌcola Ancali and part of the Bethia Group, already has 16 DeLaval VMS installed and averages 45.2 litres for the 920 cows going through the robotic milking system.

"We started using robots for 500 cows, and when we saw the economic benefits and we realised that it was possible to improve production per cow by 10% and reduce the stress of the cow so we decided to further explore," he says.

"During the second stage we decided to modify the farm, changing our conventional milking system for an automatic milking system.

"The plan is to have our best 4500 cows milked by DeLaval VMS and we believe we have a perfect set up should we decide to grow more in the future."

When the new installation is complete, 4500 cows will be milked robotically while one rotary will remain for fresh and special needs cows. There are currently four rotaries in operation today.

The first DeLaval VMS installation took place with eight milking robots in October 2014. By early 2017, 64 DeLaval VMSs will be installed making the farm the largest robotic milking farm in the world.

The El Fundo Risquillo farm is located 500km south of Santiago and is part of a larger operation including a beef farming operation and a stud farm.