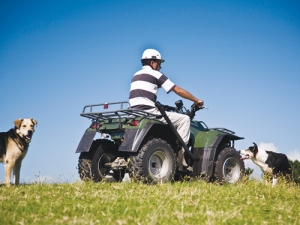 Quad bike safety devices are not going down well in Victoria, Australia.

Quad crash injuries and deaths in Australia have prompted Worksafe Victoria to push the use of crush prevention devices, but there's a howl of protest.

Worksafe Victoria (WV) has declared that crush prevention devices (CPDs) are a good way to mitigate injury in a rollover, and they want employers to fit them if rollover risk is high.

Interestingly, with no law in place requiring CPD use, Worksafe says it will consult for 12-18 months, encouraging employers to fit such a device to mitigate risk of prosecution in the event of an accident.

But this stance is at odds with quad manufacturers who cite extensive research, including accident modelling for 20 years, that indicate that CPD's are largely ineffective in saving riders from death or injury, and sometimes do more damage than they set out to prevent.

The quad makers also say that 99.6% of Australia's 350,000 quads are ridden without incident, and though the 15 quad deaths in 2015 are regrettable, they are a tiny percentage of the problem.

They want to see more emphasis on rider training, to ensure operators understand the abilities and limitations of quads, and that quads need more rider 'input' than other vehicles.

They also accept that a quad will not always be the best vehicle for a particular job, or difficult terrain; instead side-by-side vehicles may be better. These offer the protection of seatbelts and a safety structure over the passengers, features impossible on a quad.

Speaking to Dairy News, Worksafe NZ acknowledged Worksafe Victoria's stance on CPDs and the conflicting views of the quad makers. "We're waiting for more detail and the empirical evidence before commenting," a spokesperson said.

NZ Motor Industry Association chief executive David Crawford says WV's proposals are at odds with the reliable science, and that they conflict with recent coroners' inquests in Queensland and NSW: the coroners had found insufficient evidence to recommend the use of CPDs, and they suggested that more time and effort should be spent on proving CPDs' effectiveness.

The country might be in lockdown, but farmers and essential farm services are working as hard as ever to keep the rural economy rolling.