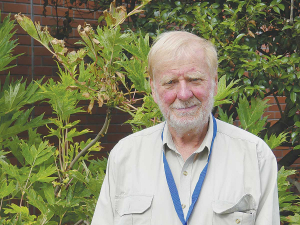 They are getting 100% yield on 20% of the inputs, as well as resilience in the face of climatic extremes, he says.

Jehne, a former CSIRO Climate Scientist and Microbiologist, and founder of Healthy Soils Australia, was the main international speaker at the recent 2020 conference of the Organic Dairy and Pastoral Group at Lincoln, which drew about 200 attendees from around the country.

The ODPG organised the conference on the theme of ‘The Regenerative Soil Solution’ - adopting a whole-ecosystems approach to farming by mimicking natural processes rather than trying to control or suppress them.

“And the beautiful news is yeah, we can do it. We can do it naturally and safely and rapidly within 10 years.”

Jehne explained that the original creation of soil – the process of pedogenesis – was done by fungi colonising bare rock 20 million years ago, eventually leading to the biosystems we now depend on.

“The fungi that colonized that rock solubilized it and mixed mineral detritus and organic detritus to make a sponge. And that allowed that rock or that detritus to infiltrate, retain water, make nutrients available, allow roots to penetrate.

“Really it’s that same process. How do we actually accelerate microbial breakdown and creation of sponge infiltration, nutrient availability, biodiversity etc, and how we can accelerate that naturally in our farming practices.”

Jehne said we have gone “fundamentally wrong” since the second world war by cultivation, fertilizing and biocides, breaking down the natural structure of soils.

Jehne said the task now was to regenerate the soil.

Farmers should “basically go with whatever nature did.”

“Look and study nature in your area and basically minimize the harmful inputs.

“At the moment we’re doing a lot of destructive things to soils – cultivating, oxidizing carbon, over-fertilization, biocides killing the actual organisms that are creating and driving nutritive availability solubilization etc.

“So we’re doing a lot of destructive things and being forced, in replacement of each of those, to put more and more inputs into the system.”

Those were all major input costs, so using natural processes instead would make for minimal input agriculture.

Instead of cultivation there were techniques of cover-cropping and companion planting, including what he called “jackhammer plants” with deep roots that open the soil.

Instead of fertilizer were natural processes of nutrient fixation, solubilization, access, uptake and cycling.

“90% of the productivity and biofertility of soils depends on these microbial processes and we can switch them on again, then we don’t need to add these vast amounts of nutrients.”

It would also help turn around climate change.

“[Atmospheric carbon] is increasing but we can use it as a resource, put it back into our soils and in that, rebuild the health of these farming systems.”

Jehne said it was “absolutely” possible to turn things around in 10 years.