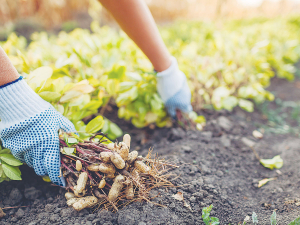 That old saying about peanuts and monkeys may be turned on its head in Northland, where a government-backed project has proven that the crop can be grown successfully in the region.

An initial feasibility study claimed that the industry could be worth millions to the region, with New Zealand companies importing tonnes of peanuts every year.

Now, additional government funding aims to take the project towards the possible commercialistion of growing peanuts in the north.

"The findings of a six month feasibility study supported through SFF Futures late last year were encouraging," says Steve Penno, MPI director of investment programmes. "This new project will build upon the initial findings to determine whether its financially viable to plant, harvet, and process peanuts at scale."

Northland Inc is taking the lead in the new project, which will run for 2 years.

"The peanuts will be grown at seven sites in Northland, across both the Kaipara and Far North districts, during the two-year life of the project," says Vaughan Cooper, general manager Investment & Infrastructure at Northland Inc.

"We hope for another successful outcome that will provide conclusive evidence that peanuts can be grown and harvested on a larger scale. This will give investors and Northland landowners, growers and farmers the confidence they need to diversify into peanut growing."

Cooper says while it's clear that returns are possible from peanuts, they also need to factor in the commercial equipment required for harvesting and drying.

"We'll be doing extensive economic modelling to determine whether the costs are worthwhile when producing peanuts at scale."

"It will also provide another crop rotation option for local landowners," he says. "Plus, we could eventually bring a 100% New Zealand grown and manufactured peanut butter to market. That's an exciting prospect."