Five hundred years in the planning 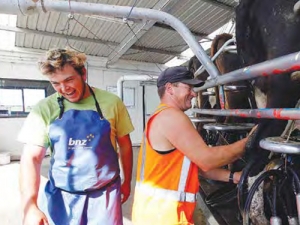    For Ngai Tahu Farming’s Rod Lamb (right), mentoring his young farm workers and seeing them grow is one of the best parts of the job.

Five hundred years is a long time, but for Ngai Tahu Farming it’s just the beginning – they are working to a 500 year business plan for the iwi.

This forethought and planning helped two of the iwi's dairy farms into the finals of the BNZ Ahuwhenua Maori Excellence in Farming Awards. The farms are Maungatere Farm managed by Hemi Dawson and Te Ahu Patiki managed by Rod Lamb.

It's the first time in the 83-year history of the awards that a South Island farm has made it to the finals, and this year there are two – Ngai Tahu FarmingandtheTahua

Tao farm in Rakaia. Tewi Trust in Waikato is the third finalist.

Maungatere and Te Ahu Patiki are neighbours, near Oxford, in what was once the Eyrewell Forest, which the iwi lost in dubious circumstances – the Kemp Purchase of 1848, which saw about 8 million ha sold for £2000.

Maori developed agriculture to sustain a population and for commerce; North Canterbury was a rainforest which capitalised the country. Maori were generally excluded from pastoral farming so the dairy farms give the tribe the opportunity to restore its mana.

In 2000, Ngai Tahu Property bought the Eyrewell Forest and as forestry licenses have expired Ngai Tahu Farming has converted the land to pasture.

Around 8500ha are being converted; seven farms now operate and there will be six more. One important benefit of the conversion is that it has secured water rights that will give iwi options in the future.

Until July 2015, Ngai Tahu Farming was a part of Ngai Tahu Property; now it is a standalone business. "The Ahuwhenua awards are an opportunity to highlight our new identity, and by entering the awards we hope to showcase Maori achievement in farming," chief executive Andrew Priest says.

Ngai Tahu Farming makes up about 12% of the iwi's holdings and it needs to make money to ensure its future.

The iwi's motto is "for us and our children after us", translated by Dawson as "no point in building empire when your people are sleeping in the basement".

Lamb and Dawson subscribe to Ngai Tahu Farming's quadruple bottom-line – four guidelines for all decisions on the farm:

• Social: building a community and developing the people with education as the key.

• Economic: assessing whether the company is

growing the ability of the land to support life.

• Environment: looking after the land, not exploiting it and enhancing it to leave it in a better state.

• Cultural: identify who we are and how that affects the farm; we are the kaitiaki of the land and must treat everything with respect.

All of the three Ahuwhenua Trophy finalists have had remarkable pathways to success with all three having been converted from their original use.