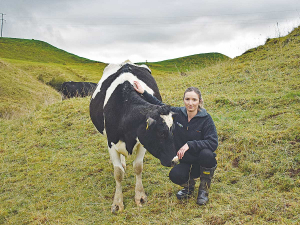 Tania Cresswell with one of her Holstein Friesian heifers.

“An easy-going temperament is one of the main traits I strive for in a cow. I work alone a lot of the time, so having a docile animal is crucial,” she says.

“Plus, I also give the cows a mineral drench in the milking shed, things like magnesium and iodine, and quiet cows are easier to drench.”

During milking, the 29-year-old zig-zags her way down the pit, changing clusters and identifying cows to draft for artificial insemination.

“At this time of the year it’s a daily race against the clock to get my farm jobs done and be on the road by 7.15am,” she says.

Creswell works as an artificial insemination (AI) technician with genetics company LIC, a seasonal position she has held for 10 years.

“I did my training with LIC in 2011. After a month working as an apprentice, I was given my own AI run.”

The job sees her driving between up to 12 local dairy farms each day, inseminating cows on heat.

“It’s a really rewarding job. The aspect I enjoy the most is getting out and talking to other farmers,” she says.

“Mating is one of the busiest times of the year and people can often get stuck in their farm bubbles for long periods.

“If the grass isn’t growing and feed is in short supply, it’s nice to be able to let farmers know others in the district are in a similar situation.”

The biggest farm on Creswell’s run milks about 700 cows.

“When they synchronise a large number of cows to come on heat together, I have to inseminate 120 cows in one visit,” she explains.

“It can take up to two hours.”

Creswell has inseminated 25,611 cows since she started as an LIC AI technician. That is roughly 2,561 inseminations a year.

Talking cows and genetics is not her only hobby.

The thrill seeker can often be found in the front seat of a rally car hurtling down a gravel road at speeds of more than 200km/h.

She is a co-driver for Ashburton drystock farmer Wayne Muckle in the New Zealand Rally Championship.

“We used to have a hill climb on the public road that goes past our support block. I’d go and watch, and thought it looked fun,” she says.

“One year I got to go for a ride in one of the cars and, as they say, the rest is history.”

Editorial: Credit is due

OPINION: It's official! New Zealand dairy farmers have the world’s lowest carbon footprint – at nearly half the emissions of other international producers.

Dairy farmers are welcoming the latest cut in the official cash rate.

Smaller herd, OAD – and the sunrise

The strong working partnership of smaller herd farmers Matt and Sarah-Jane Yates has been a cornerstone of their farming success.

One response to tight economic circumstances for many dairy farmers is to look at reducing the amount of feed they buy in for their cows, says fertiliser co-op Ravensdown.