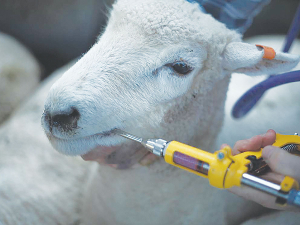 B+LNZ’s Dan Brier says drench resistance is now widespread, appears to be getting worse and a new approach is necessary.

The new Wormwise Action Plan encourages responsible marketing and sales of drench, more accurate and easier parasite testing, research to demonstrate the costs and benefits of various parasite management approaches and better training and development are among its priorities.

Wormwise is a partnership between Beef + Lamb New Zealand (B+LNZ), the Ministry for Primary Industries (MPI), Agcarm, the New Zealand Veterinary Association (NZVA) and other stakeholders.

The development of the Action Plan follows an independent review of the Wormwise strategy carried out with industry input including farmers, veterinarians, drench sellers, MPI, B+LNZ, DairyNZ and Fonterra.

"Parasite resistance to drenches is now widespread, appears to be getting worse and a new approach is necessary. We simply can't drench our way out of drench resistance."

He adds that New Zealand also faces new challenges - including potential increased risk from new or more widespread parasites arising from climate change, the low likelihood of new drench products becoming available, as well as greater transparenyc demanded by consumers on animal welfare and the use of chemicals in farm production systems.

"Through the review, we found the efforts of Wormwise and the strategic direction were largely in the right direction, but concluded there is scope to do much more," Beattie explains.

"Ultimately, additional resourcing and a different approach is required if we are to genuinely influence parasite drench resistance in time."

As part of the new Action Plan, the industry will identify best practice for working with farmers on parasite management and drench resistance in order to help other farmers. It will also work with drench manufacturers to ensure products are marketed responsibly and that robust education and training is available for those selling drenches.

The new Action Plan can be assessed on the Wormwise website: http://wormwise.co.nz/resources/

Farmers importing stock onto their farm are being urged to have a quarantine drenching regime in place to further prevent the spread of triple drench resistance.