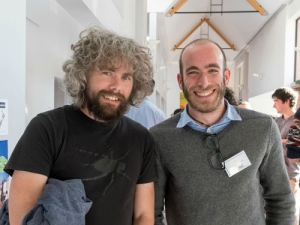 Lincoln University students are scouring the country to discover new insect species and keep ahead of potential threats to agriculture and the environment.

"This research, to understand what [insects] are present in New Zealand, is vital for us to recognise any change. Especially if it involves the introduction of species that may become pests, or spread disease," says Dr Karen Armstrong, a senior researcher at Lincoln University, and the students' supervisor.

"The only way to stay ahead of this, and to detect damaging interactions, is to know what is here. And for that, we need to produce experts in traditional taxonomy who are also trained to use modern technological approaches to describe and discover [insect species]."

Martoni has collected psyllids from more than 200 locations, identifying more than 60 different species. Brown has described more than 40 species of native weevil. In addition to finding and identifying a new species of picture wing fly and four new species of New Zealand's rare black mountain ringlet butterflies, Patrick is now researching how to recognise species that are closely related to the highly invasive Queensland fruit fly.

Expertise in taxonomy is vital for the future, argues Armstrong. While most of the insects identified by the students are native to New Zealand, one weevil is a relatively recent introduction from Europe not previously known to occur here. By comparing this weevil with unidentified specimens held in local collections, Brown discovered that it first arrived in New Zealand in 1996.

Predicting the impact of a newly introduced species is difficult, explains Brown. "This introduced weevil is only found in low numbers, but is already widely dispersed in the eastern South Island. It feeds on native species, so its numbers should be monitored in conservation areas."

New Zealand has stringent biosecurity, but it is impossible to prevent every incursion. While most species are not harmful, some insects that have established in the country, such as the Argentine stem weevil, clover root weevil and tomato potato psyllid, are damaging to the country's economy and environment.

"These discoveries highlight how important it is to have experts out collecting, accurately identifying, and cataloguing insects," says Brown.

"By depositing specimens in insect collections we can quickly identify new species in the future."

The students have archived specimens of their identified insects in national insect collections held at Lincoln University, Landcare Research Manaaki Whenua, and the Museum of New Zealand Te Papa Tongarewa.

A new research winery in the heart of New Zealand’s vine country will be a “drawcard” for international researchers, says MJ Loza.