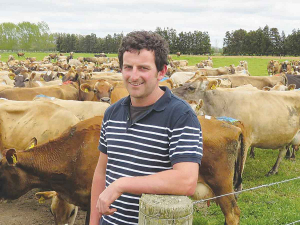 “If farmers can get more cows in-calf year upon year then they can reduce the number of replacements they are bringing through and in turn lower their methane emissions.”

“A lot of animals are being culled on pregnancy status alone, that’s before you start culling on performance or management factors,” said Sing.

“All those animals need to be replaced in the herd, and that’s driving higher rates of replacement stock. But the Jersey cow with its superior reproductive performance is well placed to help with that.”

On average, Jerseys have superior fertility over their Holstein Friesian and crossbred counterparts.

At the last animal evaluation run the average fertility breeding value (BV) for Jerseys was 0.8 versus 0.6 for crossbred and 0.1 for Holstein Friesians.

“Jerseys are known for their superior reproductive performance and their higher rate of cycling prior to mating which results in less intervention and improved in-calf rates.”

“Culling due to conformation and management traits is also lower on average with the Jersey cow, which allows for further reduction in replacement numbers.”

Figures taken from a sample of herds show that Jerseys can require about a 5% lower replacement rate than Holstein Friesians.

“For an average size herd that’s 22 fewer replacements. Each of those replacements will be producing about 22 grams of methane per kilogram of dry matter eaten. So at a conservative estimate you could reduce your methane emissions by about 1.7 tonnes annually just through a lower replacement rate. Not to mention the cost savings of rearing less young stock.”