Scabby mouth a scourge, but treatable 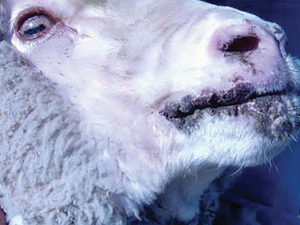 Not a pretty site, but scabby mouth is preventable and treatable.

This highly infectious viral disease affects most hoofed animals and dogs and can be transmitted to humans.

The disease is widespread throughout New Zealand and usually occurs in young animals. Adult animals can also be susceptible if they have not been exposed to the virus and therefore do not have immunity.

Outbreaks can occur throughout the year but are most prevalent in late spring and early summer.

Scabby mouth is common and the infection rate in some sheep flocks can be as high as 90%. It mostly affects lambs and although the lesions are only temporary it can significantly harm the growth potential of lambs and hoggets by reducing their suckling and grazing.

Deaths caused by scabby mouth are uncommon although sometimes the lesions can become severely infected. A lactating ewe infected with lesions on the udder may be predisposed to mastitis and consequent starvation of the lamb.

Because the disease is readily transmissible to humans, shearers may be reluctant to shear sheep heavily infected with lesions.

The disease is caused by a virus which can remain viable in the scab material for some time, although it is broken down by environmental conditions such as rain or UV light. It survives well in buildings so these are a more likely source of infection than contaminated pasture.

Animals which carry a low-grade infection may also be a likely cause of disease spread and reoccurrence. Trauma to the skin aids the establishment of the disease and this is where the scabs or lesions will form.

Causes of trauma include grazing around thistles or matagouri, erupting teeth and head butting during fighting.

The lesions are commonly found in the following locations:

• Between the hooves and behind the fetlock

It can also become more generalised and cover the animal’s entire head, muzzle and ears.

The lesions generally cure by themselves within a few weeks of infection, as long as there is no secondary bacterial infection. After an initial infection, sheep will usually develop immunity lasting several months.

Some sheep may become re-infected soon after recovery (before protective immunity has been developed), although the symptoms will be fewer than the initial infection and may not last as long.

Scabby mouth is common and the infection rate in some sheep flocks can be as high as 90%.