A blaze of yellow 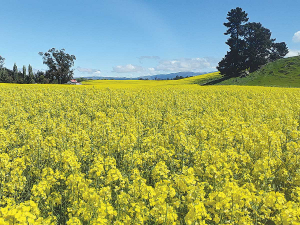 Thousands of hectares of southern farmland is a blaze of yellow as the annual rapeseed crop comes into bloom.

Several thousand hectares of South Island farmland is a blaze of yellow as the annual rapeseed crop welcomes the spring.

Cropping farmer Warren Darling is one whose display regularly wows the public, since his farm straddles State Highway One just south of Timaru.

His 120ha of rape is at “peak flower” and he expects to harvest at the end of January.

Darling has been growing the crop for about 12 years, along with wheat and barley. He is now also trying sunflowers, beans and industrial hemp, in an effort to find compatible crops to move to a four-year rotation.

He says it is not hard to grow.

“It fits the rotation for us, because we are able to use a different family of chemistry on our weed problems, that sort of thing.

Darling doesn’t burn off the post-harvest residue but will dig it back into the soil, ready to sow in wheat about April.

He is contracted to supply Rolleston-based Pure Oil New Zealand, which produces a number of lines including cold-pressed pure virgin rapeseed oil, retailed under the Good Oil brand.

Managing director Nick Murney says his suppliers make up close to 4000ha of both high-oleic and standard rapeseed and also, latterly, sunflowers. Most growers are in South Canterbury and Southland, with some in North Canterbury.

Rapeseed is not grown in Mid Canterbury to avoid cross-pollination problems with that district’s brassica seed producers.

Murney explains that the factory was originally built by Solid Energy to produce biofuels, which he describes as “a sunset industry before it was a sunrise”.

However, as an edible oil producer the factory is going from strength to strength and is now running at 85% capacity compared to 28% when they took it over.

Murney says the high-oleic Good Oil brand has been in the market about four years and is “going really well”.

They have recently added a cold-pressed virgin sunflower oil under the same brand.

“And it’s not just human food; we’re in petrochemicals, stock food and in beauty products. There’s lots of different sectors that we sell our products to.”

The company makes an equine stock feed and oil-based supplements under the Leg Up brand. Meal is also sold as feed for pigs, poultry and dairy calves.