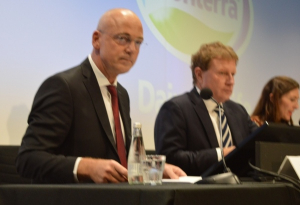 Fonterra chairman John Wilson says as a farmer he is angry and disappointed with today's arbitration decision over the false botulism scare in 2013.

Speaking at a media conference with chief executive Theo Spierings, Wilson said the decision did not fully recognise the terms of supply agreement between Fonterra and Danone.

However, Wilson says he accepts the decision to award Danone $183 million in damages.

“We will now turn our attention to delivering the best possible returns for our farmers despite this outcome,” he says.

He added that Fonterra’s management is also committed to this.

Wilson and the management team briefed the Shareholders Council on the arbitration decision before the media conference.

He says there is also frustration among shareholders.

Danone sought damages for recalling products; the precautionary recall was a result of a false test from a third party.