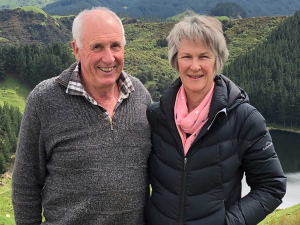 This family-operated business is owned and operated by Tony and Lynda Gray who are focused on maximising returns in an environmentally sustainable way.

It was the first farm to complete an Horizons Whole Farm Plan (SLUI) and over the past 14 years this has included planting more than 1,000 poplar poles and 6ha of Douglas fir. Along with 1,260 sheep, 100 beef and 420 deer, the farm incorporates 125ha of QEII-covenanted regenerating native bush and has a possum control programme that includes poisoning and trapping. The Grays’ are fencing off the last waterway and are planning to isolate wetlands and do riparian planting. They have started investigating carbon farming options and are working with a local beekeeper who has hives on the farm.

The farm is starting to reap financial rewards from years of improvements around livestock production and environmental protection and the family wants to ensure this progress continues.

Owner-operators Chalky and Lesley Leary have had a stake in Onga since 1973 and are now setting up a succession plan for their nephew to take over.

Along with the stock, Onga farm has 118ha of radiata pine that brings in an average yearly income of $100,000. The property was smothered with gorse in 1973 and forestry was originally introduced to control it – and later to help manage erosion. The farm is now virtually gorse-free and boasts significant new infrastructure.

Three blocks of native bush are protected with QEII National Trust covenants and, for shade and erosion control, native bush is continually being fenced off and poplars planted. Other priorities are actively managing possum and deer, along with soil and water conservation.

Having spent 12 years in local government, Chalky appreciates the challenges facing both councils and farmers, and is keen to demonstrate the good work that’s happening.

Brendon and Rachel are third generation farmers on this property that was chosen for its excellent soils and has been actively developed since 2000 under a family Trust.

The arable and finishing property’s main crops are wheat, maize, peas and grass, while it finishes about 2,500 lambs and 100 cattle annually.

Decision-making is based on caring for the soil – including using soil maps and having extensive sub-soil drainage. The farm is one of the first arable cropping enterprises to seek resource consents under the Horizons One Plan, plus fossil fuel usage has significantly dropped. Other conservation measures include retirement planting, stock exclusion from waterways, retention dams to reduce runoff and a fully reticulated water system.

These owner-operators have completely transformed the dairy section of their property since buying it in 2017, merging two dairy farms into one self-contained unit.

They now farm 350 dairy cows over 131ha, with a further 80ha adjacent to boost the summer milking platform. The farm has a low stock rate and high production – about 1.7 cows per hectare – and significant time and investment has gone into improving infrastructure and water provisions.

The biodiversity of the property has also undergone a transformation, including the planting of 5,000 pines and 700 natives over the past two years, the creation of four wetlands, monthly possum control and the installation of kilometres of fencing along creeks.

The couple has implemented everything they wanted for the farm and feel they have greatly improved the state of the property since they took over.

Woodhaven Gardens is a family business established in 1978 by Eric and John Clarke, with the lifestyle choice soon becoming a passion for producing the best produce available.

Woodhaven is unique for its size and crop diversity – 23 different vegetables, plus maize and ryegrass to improve soil health and reduce nutrient losses. Annually, they sell 27 million individual vegetable units (between 7–10% of the national supply), employ about 250 staff, and contribute between $30–35mil to GDP.

In recent years, Woodhaven has significantly invested in reducing its environmental impact, adopting a science-led approach that balances conservation with commercial success.

Woodhaven’s owners and directors view the farm holistically – farming for themselves while also enriching the lives of their staff, community, local Iwi and environment. Their approach has been shared with Horticulture NZ and is being rolled out to other growers in the region.