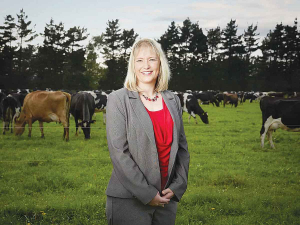 The high profile former chief of Rabobank’s New Zealand operations has been with Skellerup, the owner of the iconic Red Band gumboot, for just under a month.

The Christchurch company was an instant switch for Gourley (nee Moynihan), whose presence at Rabobank gave the Dutch owned, global bank a Kiwi identity and voice in the agri industry.

At Skellerup she is managing a range of products and people, enjoying the initial feel of working for a national “household name,” she says.

“The best way to describe Skellerup from my perspective – and I guess what attracted me – is that it’s a very firmly owned organisation,” Gourley told Rural News.

“And Skellerup has a global presence, which was really the opposite of my previous role, which was clearly a global organisation that happened to have a New Zealand presence.”

The amount of international and domestic travel involved in her former job also tilted her towards a new challenge. Living in Canterbury, and with a young family to consider, Skellerup offered her a head office located in Christchurch.

Three weeks into her new management position, Gourley expected Skellerup would offer plenty of opportunities to apply her banking experience, from product development through to relationships with customers.

The agri division makes products for the dairy industry, including rubberware, as well as animal hygiene products and well known rubber footwear brands.

The listed public company recently reported record pre-tax earnings of $41m – up 5% on the previous year. Total company profit is from revenue of $245m, which is up 2% on the year before. Gourley’s agri division earned just under $23m – up 10% on the previous comparable period.

In a statement to NZX, the company said its operational gains in agri in the past year offset the impact of softer markets including North America and Australasia.

Gourley says that for her the company’s “whole value chain” approach to developing, manufacturing and marketing product is an exciting part of the business.

One of the firm’s recent successes is a breakthrough partnership with Europe-based ADF Milking to supply a teat dip for post-milking. The design of the product included square barrel geometry with automatic dipping and flushing to optimise milk production, cut costs and improve cow welfare.

Skellerup was able to move from a prototype to detailed R&D within six months at its Christchurch plant. The new liner was trialled on farms in Australia and NZ over the following six months before a move into full production. It had taken three years for the product to hit the market.

In its annual report Skellerup said since the launch, ADF Milking had markedly grown its market share year-on-year.

For her part, Gourley expects to apply some of her old skills to managing her part of the business.

“The economics side means I understand the markets we operate in, from a rural background, whether that’s here in NZ or internationally. That certainly helps a lot.”

Banking was also about interpersonal skills, she said.

“Banking teaches you a number of things, one being relationships with people and customers because, ultimately, in a bank money is a commodity and it comes down to interaction with people.”

Finance also gives a great insight into best business practice and what can go wrong. Every business has layers of complexity, but banking has taught her to recognise the “key drivers” in most operations, she said.

In Skellerup's annual report, chair Liz Coutts pointed to some of the wider challenges for the company and other NZ exporters.

She says the annual result is particularly pleasing “in a year when the geo-political environment presented challenges and tariffs that directly impacted on our bottom line”.

Coutts pointed out that one of Skellerup’s advantages across its diversified divisions is having teams in NZ and elsewhere.

Product design is done in NZ, Australia, US and Europe, while manufacturing and assembly are global, with staff spread from Christchurch to Asia, Europe and North America. Like other NZ exporters with overseas units, it is effectively a 24-hour business.