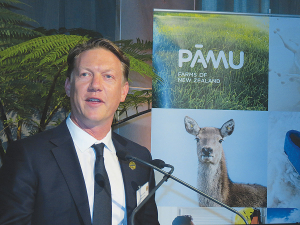 This has been revealed in answers provided by Landcorp (trading as Pāmu Farms) to an Official Information Act (OIA) request by Rural News, submitted last December but not answered until February.

Rural News’ questions were lodged on December 6, 2018 and should, by law, have been answered within 20 working days of lodgement. However, bureaucratic delays and holiday shutdowns delayed the answers until February 14.

Rural News submitted several questions via the OIA regarding Landcorp and its taxpayer-funded operations. This followed revelations that, last year, the state farmer had made an undisclosed submission to the Tax Working Group more than a month after submissions had closed. Landcorp’s submission advocated – among other things – capital gains, water and environmental taxes.

“EY was engaged to help scope and draft the TWG submission, and Peter Fraser did some limited peer review…”, it says in the OIA response.

EY was paid $11,141.93 plus GST for its work, while Fraser – who Landcorp says only attended one meeting along with its staff and Treasury – was paid $750 plus GST.

Landcorp’s ‘head of environment’ is a former academic and dairy farming critic, Alison Dewes. She was a member of the company’s environmental reference group for two years until she took up her current role at the state farmer in January 2018.

Despite the amount of time and work spent by its own staff on the TWG submission, Landcorp cannot account for these costs.

“It is not possible to break down the staff time in relation to work on the submission, as it formed part of the overall day-to-day work of relevant staff and is not accounted for separately,” its OIA response says.

Meanwhile, Landcorp’s late submission to the TWG and advocacy of more taxes – which has raised the ire of the farming sector – will continue to raise suspicions that it was done to appease its current political masters. This follows the TWG recommending the implementation of a capital gains tax, and taxes on water extraction and environmental pollution.

However, it also conceded via the OIA that,

“The submission was sent by EY to the Tax Working Group (TWG) on May 31 [2018].” This indicates that the submission could have been sent in by the deadline, despite the supposed ‘key’ staff member’s bereavement leave.