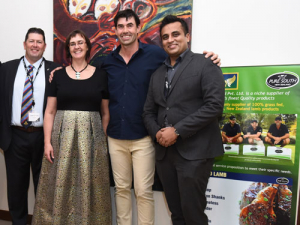 Geoff Allott, chief executive at QualityNZ, said the contract with the airline caterers and the strong interest from five-star hotels highlighted the growing demand for New Zealand lamb in the world’s second most populous nation.

“QualityNZ and Alliance are targeting the higher socio-economic category, which is represented by more than 200 million people. It is estimated this number is expected to more than double within the next 10 years to half a billion people, and India is forecast to exceed China’s GDP for the first time by as soon as 2022.

“Put in context, India is growing between 8-10% each year, effectively more than the size of New Zealand's whole economy every year.”

Although QualityNZ has initially focused on introducing Pure South lamb into the five-star hotel market, it is also making inroads into the restaurant, catering, organised retail' and e-commerce channels.

The role of the cricketers was integral to the promotion of lamb in India, said Allott.

“They understand the potential of the market, having been immersed in the country through playing and coaching over many years. Cricket is a uniting language in India, and our ambassadors’ reputations have had a huge impact on enhancing the reputation of our own brand and the brands of those that we represent in India.”

John Rabbitt, Export Sales Manager, Alliance, said: “India represents a significant opportunity for Alliance in the long-term. Alliance and QualityNZ are committed to a long-term strategy to develop this market.

“India is forecast to become one of the largest economies in the world. Our expertise and reputation for producing the highest quality lamb, combined with QualityNZ’s unique in-market sales and distribution model and customer network, means we are well-placed in India.

“The country’s fast-growing middle and upper classes have a real appetite for our lamb and we are working hard to capture value from this market for our farmer shareholders.”