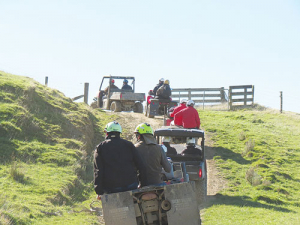 The issue of death or serious injury from quad crashes never seems far from the headlines.

With four deaths in the farming sector so far this year -- two quad-related fatalities in South Canterbury in the last two weeks -- WorkSafe New Zealand has recently spoken up about when it is acceptable to carry a passenger on such vehicles. Its statement -- referred to as a ‘clarification’ -- follows lengthy talks with Federated Farmers, Beef + Lamb NZ and DairyNZ.

Under the Health and Safety at Work Act of 2015, persons running a business such as a farm must identify and manage risks arising from that work as far as reasonably practicable.

Worksafe NZ’s document ‘Acceptable circumstance to carry passengers on quad bikes’ has raised the hackles of the Motor Industry Association (MIA), which believes the WorkSafe advice flies in the face of the industry code of practice as agreed by member companies in January 2016.

WorkSafe’s position is unchanged: it insists that single seat quads should not normally be used to carry passengers. Doing so increases the risk of accident by making the vehicle more unstable, harder to control and more likely to roll over.

However, WorkSafe appears to have bowed to the industry’s lobbying which claims that the humble quad is the only ‘real’ means of getting people around a farm in many cases, as typified on a large-scale, high country property.

First up, says Worksafe, farmers and landowners should select a vehicle that is safest to do the job. But it knows many users do carry passengers and now suggests they do so only after thoroughly assessing whether there is a practical alternative, considering availability of alternative vehicles, terrain and rider and passenger capabilities. The integrity of this assessment is likely to be critical in the event of any investigation should anything go wrong and result in serious injury or death, Worksafe says.

“We have modified our stance based on the 2014 regulations that say you must not,” says Al McCone, sector leader for agriculture. “The onus is now on the owner, manager or person in charge to make a considered decision based on the individual situation, and the risks likely to be encountered.

“We understand that the practice is happening on farms as we speak, and we need to create a cultural change that sees users thoroughly assessing risk [whereby] we will see [fewer] accidents.”

In contrast, the MIA, which represents the importers and distributors of quads, has thrown up its hands in dismay at the recent WorkSafe statement. Chief executive David Crawford says MIA believes there is never an acceptable time or situation when passengers should be carried on a machine designed and engineered to carry one person.

He claims it is irresponsible for a government department to contradict manufacturers on what is and is not acceptable use of the products they produce.

The industry group issued a code of practice applying to all quads and side-by-sides (SxS) sold in NZ by its members, which came into force in January 2016.

In a letter to the Minister of Workplace Relations and Safety, Michael Woodhouse, Crawford has urged the government to withdraw this advice immediately and revert to the previous best practice guidelines, because not doing so materially increases the risk of injury.

He further commented “the health and safety of users is far too important to be marginalised by shoddy government policy”.

No further information has been received from the minister’s department as Rural News goes to press.