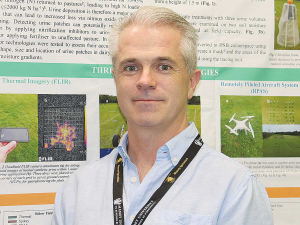 Policymakers in Ireland have learned the lesson about demonising farmers – just don’t do it.

That’s the word from a leading Irish scientist, Dr Karl Richards from Teagasc, that country’s semi-state organisation that is responsible for R&D, training and advisory services to farmers.

Richards told Rural News, at recent seminar at Massey University, that policy makers in Ireland have realised that farmers will react badly to being constantly demonised and are less likely to react positively to improving the environment.

He says policymakers and farmers in Ireland are now working collaboratively and policy makers better understand the challenges that farmers are facing and the constraints that they are working under.

Richards says there are many initiatives in Ireland to look at ways to reduce greenhouse gas (GHG) emissions and improve water quality.

He says while Ireland only has 1.6 million dairy cows it conversely has about five million head of beef, all of which contribute to GHG emissions. He says the dairy industry is expanding and it is becoming more intensive and there is now a focus on the environmental footprint of that sector.

“Having said that, the Irish dairy industry still has the lowest carbon footprint for the sector in Europe,”

Richards says Ireland has now embarked on a significant knowledge transfer project to educate farmers about the impacts of climate change, and what is agriculture’s contribution to that. He says it’s getting a sense of what policymakers require from the sector.

“We are looking at is what practical things a farmer can do on their farm to reduce emissions. Recently we produced a very simple guidance document for farmers, which illustrated ways of improving farm sustainability – primarily carbon and GHG emissions and on water quality.”

Richards says Ireland has set up an agricultural sustainability support advisory service, which is a free service to farmers. He says it’s got 30 advisors who do not have clients – so they are free to work with any farmers in selected catchments areas that have been highlighted as having poor water quality and where agricultural is a dominant cause.

He says the advisors are there to help farmers and recommend ways to improve nutrient use and reduce GHG emissions.

“The advisors have visited about 300 farms and at this stage 96% of the measures they’ve discussed with the farmers have been completed. It’s a voluntary scheme and the advisors can’t tell farmers to do anything, but they put the options in front of them and the vast majority of farmers have said yes.”

Richards believes that one of the reasons for the high level of compliance is that the advice is completely independent and is one-on-one with the farmer.