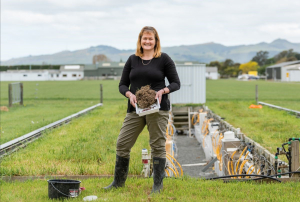 Dr Trish Fraser has been named the recipient of the 2020 Women of Influence (Rural Category) award.

She received the award in recognition of her three decades of contributions to the rural sector and community.

The judges praised her collaborative approach and her rare skill in communicating science to farmers.

Fraser says the award is a great honour.

“I never think of myself as a trailblazer,” she said, “but in retrospect what I’ve done out of passion and interest did make an impact on the communities that I serve.”

Fraser has worked closely with the cropping sector to understand the interactions among soils, crops and the environment.

She has been at the fore of research addressing a wide-range of soil-related issues in the cropping sector, delivering practical knowledge to the farming community.

In her work for Plant & Food Research, Fraser leads a team of seven to investigate soil-related issues in cropping.

She has mentored many scientists throughout her career and is passionate about inspiring a new generation’s interest in sustainable production and communicating science directly to farmers and rural professionals.

“When I first started as a soil scientist almost 30 years ago, the rural community was extremely dominated by men,” she said.

She said that at the time she felt she had to prove herself and the quality of her work, which she did by attending field days to communicate her findings and educate farmers on how to improve soil health.

“Gradually they’ve come around, and they now value and respect me for the work I’ve done.”