Drought bites top of the South 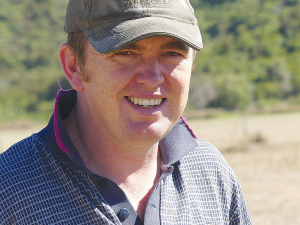 Farmers across the top of the South Island are pinning their hopes on forecast rain to ease a drought some say is shaping up to be the worst since 2001.

Pastures were tinder-dry across the top of the South, contributing to the huge wildfire near Nelson.

Irrigators were having their allocations cut, townies were being asked to conserve water, and travellers picking up rental cars were being presented with apologetic notes explaining why they hadn’t been washed.

Local farmers had already had two drought meeting with DairyNZ during February.

“That’s when some pretty drastic decisions will be made. That’s when we’ll start talking about drying off early.”

Langford, who comes from a long-time Golden Bay farming family, milks 250 cows on his unirrigated 93ha a few km south of Takaka. The last rain it had was just 6mm in January.

He uses a summer crop of lucerne as a way of “putting green in front of the cows” but said even lucerne was struggling in the heat.

Langford said most of the dairy farmers in the district were already on once-a-day milking. The only one at the meeting who was still milking twice a day was on irrigated land, but irrigation was on the verge of being shut off as the Takaka River flows dwindled.

Langford said the district had had a good spring, but even so the ground was only wet on top with nothing underneath.

“The fortunate thing about our spring was we continued to get small rain events, 20-25mm, almost on a weekly basis or more. But what we didn’t get was a 100mm or 200mm rain -- which is really common for Golden Bay, but we haven’t had one of those since July.”

Amanda Tait, who is sharemilking 340 cows with her husband Richard on a property just north of Takaka township, says they hope to keep milking “at the moment” but are expecting a huge loss of production.

“There’s just no grass. I went walking around yesterday and it just shocks you. Even the weeds are dying,” she said.

Tait said they had decided to let a worker go, while she would be going back to work to make ends meet. “We just have to do something.”

They were also culling their empties far earlier than usual.

The Taits have some irrigated paddocks but they were just “keeping green” and not growing.

“We’ve got 40ha irrigated but the council just shut us down to 50% the other day, so that’s dire.”

Paddocks that haven’t responded well have been shut off to keep what water they have for the paddocks that appear to be doing OK.

Their last rain was Christmas day “and that wasn’t really a rain,” Tait said.

Even with rain, she said it would take at least a month for things to start growing again.